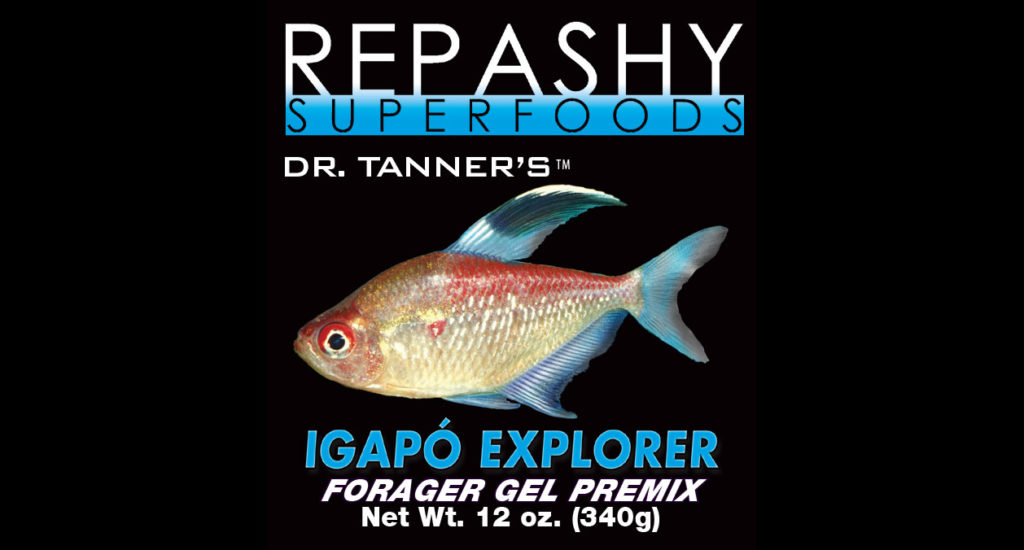 Igapó Explorer is a new food designed to emulate the forage-based diets of most rainforest-dwelling tropical fish.

In nature, most aquarium fish species rarely eat other fish. Only a minority of species are piscivores, yet most aquarium fish diets are based mainly on fishmeal, because it is widely available and comparatively cheap. Yet, there are better ways to feed your aquarium fishes, both nutritionally and ecologically.

In 2014, Dr. Stephan M. Tanner and Allen Repashy released a ground-breaking new fish diet: Fruut-Luups. It’s a combination of papaya, mango, organic banana, and fig, complemented with easily digestible black soldier fly, krill, and squid. The idea behind this formula was that, in nature, fish often eat fallen fruit with all the extras, in the form of flying or boring insects and their larvae. While the initial concept was very successful, we further refined this “fruit snack” over time into a more complete, healthy, and nutritious formula.

When the rainy season hits, vast stretches of tropical and subtropical rainforests worldwide are flooded. Countless fish species, such as tetras, catfishes, loaches, barbs, knifefishes, cichlids, livebearers, killifishes, labyrinthfishes, rainbowfishes, gobies, gudgeons, and oddballs follow the waters flowing into the forests. These “rainforest explorers” are rewarded with a rich bounty of terrestrial and flying insects, other invertebrates, nuts, fruits, seeds, legumes, herbs, and greens, which are all now in reach because of the elevated water levels.

When the original idea for Fruut-Luups was born, the Amazon freshwater swamp forests were very much on our mind. The blackwater-inundated forest is called Igapó, and the whitewater type is known as Várzea. Tropical swamp forests contain many legume trees that belong to the bean family (Fabaceae). In fact, Fabaceae is the most common family found in tropical rain- and dry forests in South America and Africa. Hence, we added pea flour and alfalfa to the formula, both from the family Fabaceae. Since seeds and nuts play a role depending on the type of forest, we added almond, coconut, and flax seeds to represent these food groups, which contain valuable fats and minerals and act as carriers for fat-soluble vitamins. As a natural source of anthocyanins, we added black mulberry fruit powder. There is evidence that anthocyanins inhibit mold formation and work as antioxidants; plus, this ingredient gives the new formula an attractive color, smell, and flavor. These ingredients stand in for native swamp trees and shrubs, as most of these are not commercially available. We retained organic banana and mango, fruits that have proven their worth in many tests series. Consequently, the new formula has a much wider plant base with fruits, nuts, seeds, and pods.

High-quality proteins and fats from three major invertebrate groups complement this diet: black soldier fly meal (stand-in for insect), krill (stand-in for freshwater shrimp, which are very common in the tropics, but krill is higher in eicosapentaenoic acid [EPA], and docosahexaenoic acid [DHA]), and squid (stand-in for mollusks [snails, slugs, and freshwater mussels]). All these animals are widespread in freshwater swamp forests, and they are the most important protein and fat sources for adult fish to spawn, for juveniles to grow, and for adolescents to fatten up for their long migrations back to their spawning grounds further upstream.

Check out the full product label, including ingredients and instructions for the new Igapó Explorer gel-based aquarium fish diet.