Continued from Part 2 in which we were introduced to the flora of Dr. Adeljean Ho’s unique vivarium. 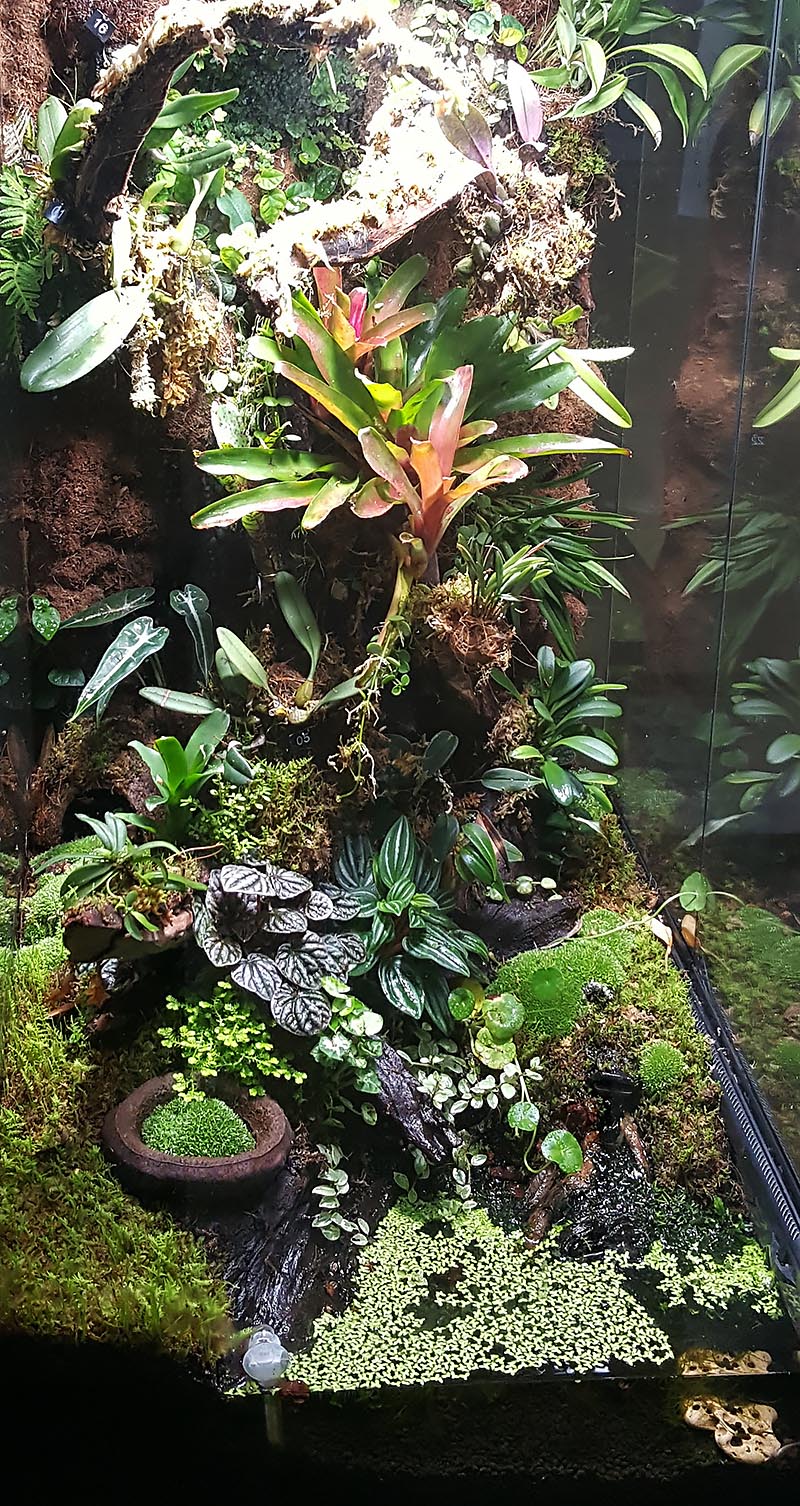 The small pond at the base of Dr. Adeljean Ho’s orchid-filled vertical vivarium houses even more secrets.

MP: Let’s talk about the “water feature” in this vivarium. Give me some details.

AH: The actual water volume is roughly 6.5 gallons; it covers the 18 X 24″ footprint of the vivarium to about 3.5″ in depth. And then there’s a little more in the canister filter. The actual space that’s viewable is very small. It’s 10″ X 4″, semi-diagonally, and is roughly 30 square inches of water surface area. The canister filter pulls water from under the false bottom and delivers the return water down a piece of Mopani wood into the open area. It creates a small pseudo-waterfall.

The visible substrate in the water area is Fluval’s Plant and Shrimp Stratum. The sloped part of the false bottom is covered in window screen, and then on top of that is a really thin layer of window-unit AC foam prefilter. It’s less than 1/4″ thick, and helps obscure places where the false bottom might otherwise be uncovered and exposed. Still, the slope was a pain, with substrate wanting to roll off, so there are pieces of lava rock and wood strategically located to keep the substrate in place so it doesn’t create a landslide down into the water portion.

MP: Is the water heated?

AH: No, it’s room temp. I don’t heat anything in the system because I’m trying to grow cool-growing orchids. The species I selected will tolerate room temps. So the only heat into the vivarium comes from the ambient heat and what the lights put in, which is just a little.

MP: What did you select for the living aspect of the water area?

MP: Why do you have Duckweed?!

AH: I have so much bright light. The pond is an open surface, so [the Duckweed] gives shade to the residents underneath. I do cull the Duckweed, which has the added benefit that it’s a pathway for nitrogen export out of the system.

MP: So what lives under the Duckweed?

AH: I chose the fish and shrimp because of their size. What were the smallest and most brightly colored things that could fit in that area?

I settled on Galaxies [a.k.a. Galaxy Rasboras or Celestial Pearl Danios, Danio margaritatus] and Cherry Shrimp (Neocaridina davidi). They’ve done well, although I lost one of the Danios that got trapped under Java Moss while I was hunting a tadpole. 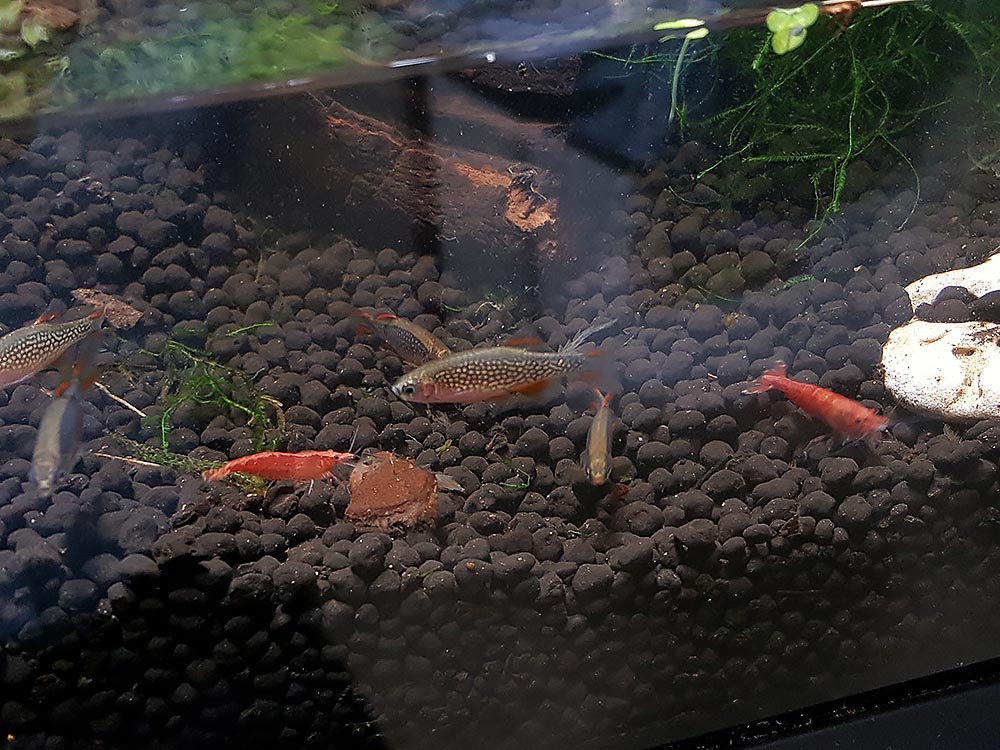 Celestial Pearl Danios and Cherry Shrimp make for ideal inhabitants for the small visible portion of the water in this setup.

The shrimp, there are still four or five in there. They’re a little more finicky than the fish, not growing as fast. I would assume that they’re breeding, but I haven’t seen any neonates. They’re probably just tasty snacks for the fish; it’s probably why my fish don’t need to be fed at all! 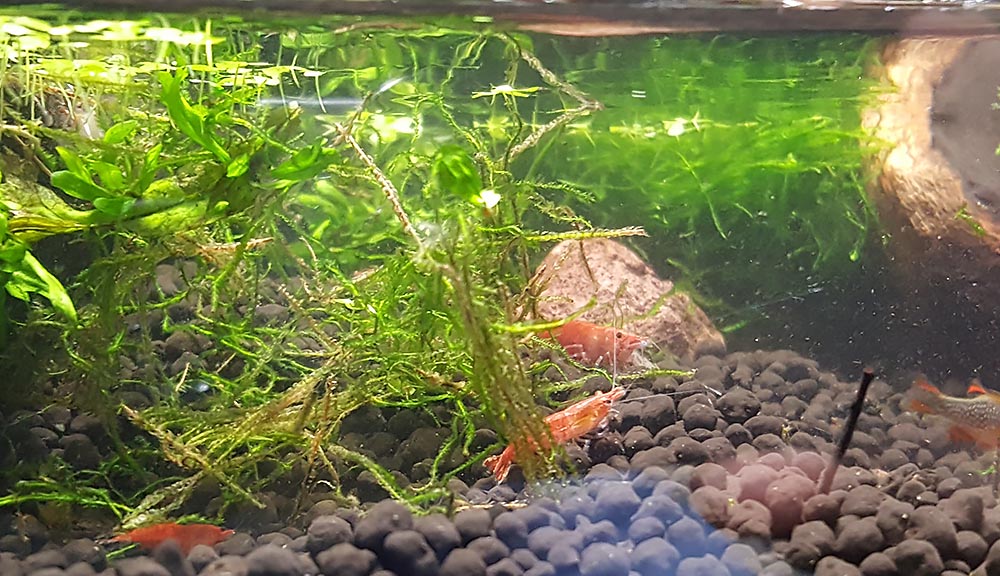 MP: OK, I know you’re joking a little. What do you feed?

AH: I rarely feed, because there’s so much organics and life in the system, so feeding is more of a supplement with extra food like Hikari’s Micro Pellets.

MP: Do you do water changes?

AH: Technically I do, based on the misting system’s overflow. I will probably not try to achieve a fully-balanced rate of misting and evaporation, instead ensuring that there is some turnover. Most recently, about 1.5 gallons was slowly drained from the system as a result of misting additions over the past three weeks.

MP: Ok, so earlier I hinted at the concept of a bio-active vivarium. That’s basically like a living reef aquarium, where there are all sorts of life intertwined, working together. In this case, that includes bugs, which are like a reef tank’s clean-up crew.

AH: Yes, I have both isopods and tropical springtails (Collembola sp.) in this vivarium. I maintain separate cultures of both, which I started with seed cultures and ramped up populations before seeding the vivarium. Altogether the vivarium was up and running and seeded with these invertebrates four months before adding the frogs.

But there’s more than just the isopods and springtails. I think I have some stray bugs that made it past the chlorine dips that are used to prevent bringing in insects and disease on plants. Most plants can tolerate a 10-15 minute dip, which I did for most everything. However, the orchids don’t get dipped; they’re too expensive to risk. Wild moss is pretty dense, so it’s hard to get it completely clean, whereas the orchids usually arrive bare root, so they’re a minimal risk.

So I have one or two types of millipedes in the vivarium. I’m pretty sure other smaller stuff was eaten by the frogs; I see other bugs more in the vivariums that don’t have frogs. 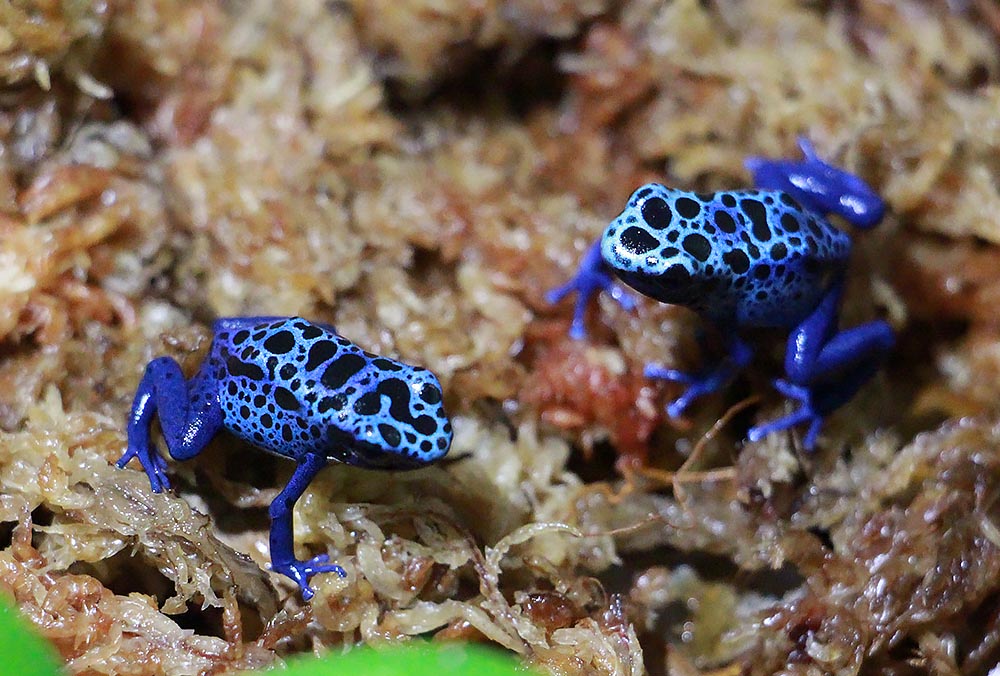 MP: Ok, so the frogs. We barely talked about them at all. What can you tell me about them?

AH: These are Dendrobates tinctorius, the “Azureus” morph. They’re pretty common in the dart frog hobby and have been captive-bred for decades. I chose this particular frog for three reasons. First, their color: it stands out against the green and brown background, and I just like blue. But they’re also large and bold, so you actually see them; they don’t hide all the time. But the last criteria: they’re quiet. Since this vivarium was for my office, having a frog with a loud, distracting call would have been a problem.

I obtained the frogs as young froglets, which I housed in a simple grow-out setup while I built the vivarium and let it become established, just as I did with the isopods and springtails. Now these frogs are breeding themselves. 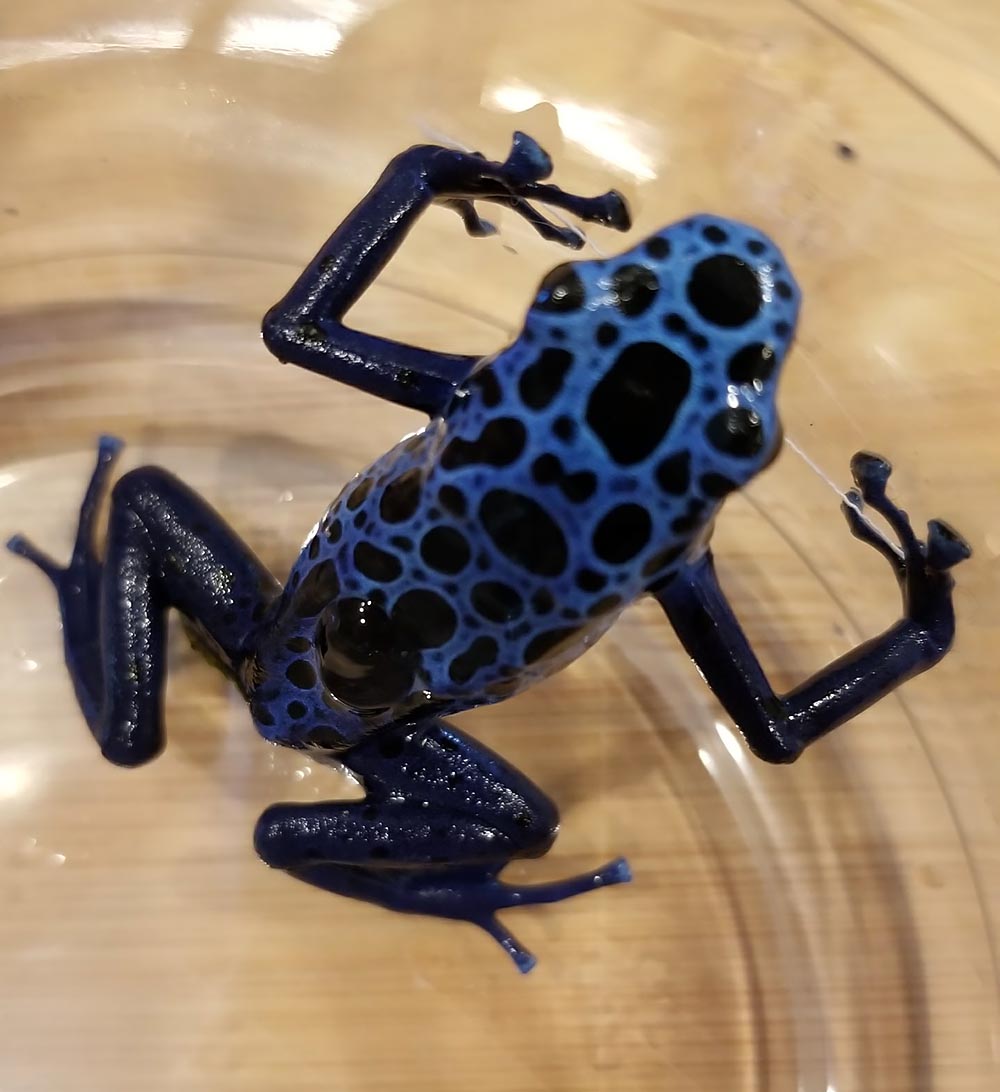 A parental dart frog carries a tiny black tadpole on its back to a watery destination, typically a bromeliad, where the tadpole will then grow and develop. 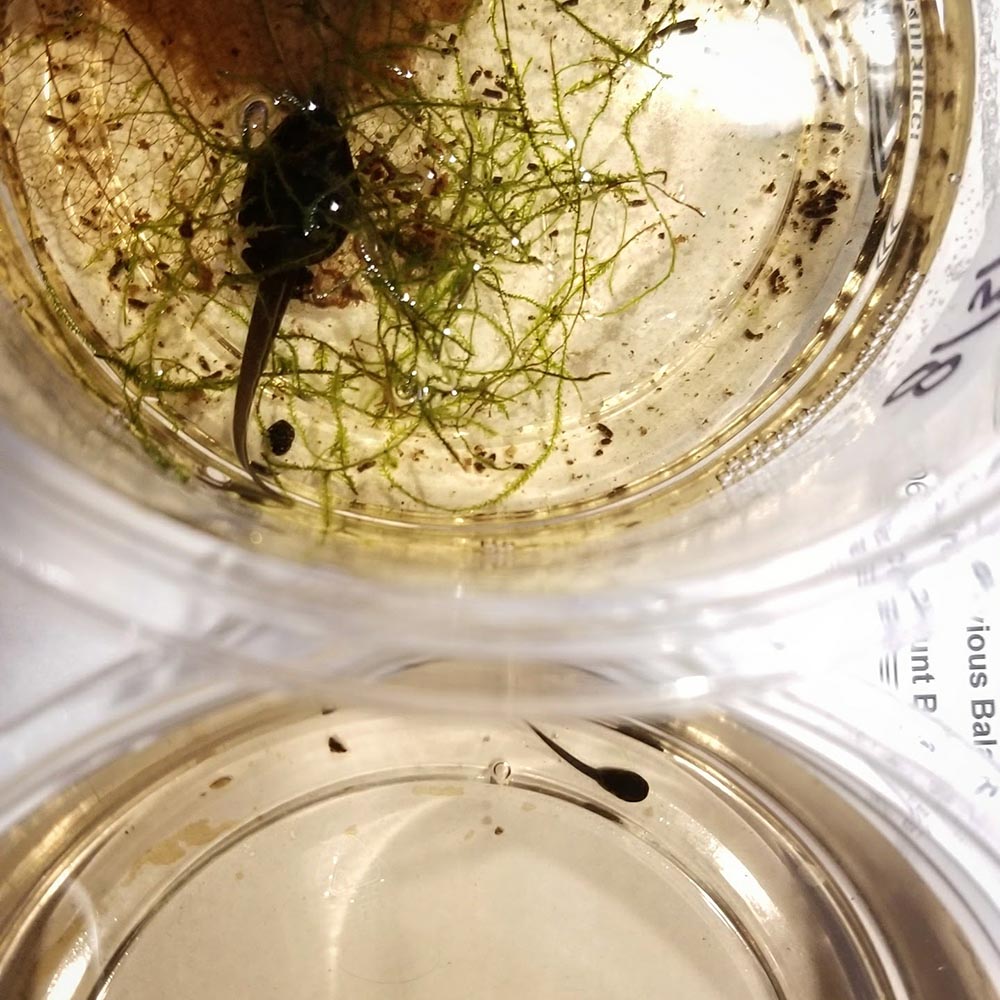 A recently hatched tadpole (below) is dwarfed by a sibling that’s a couple months older. 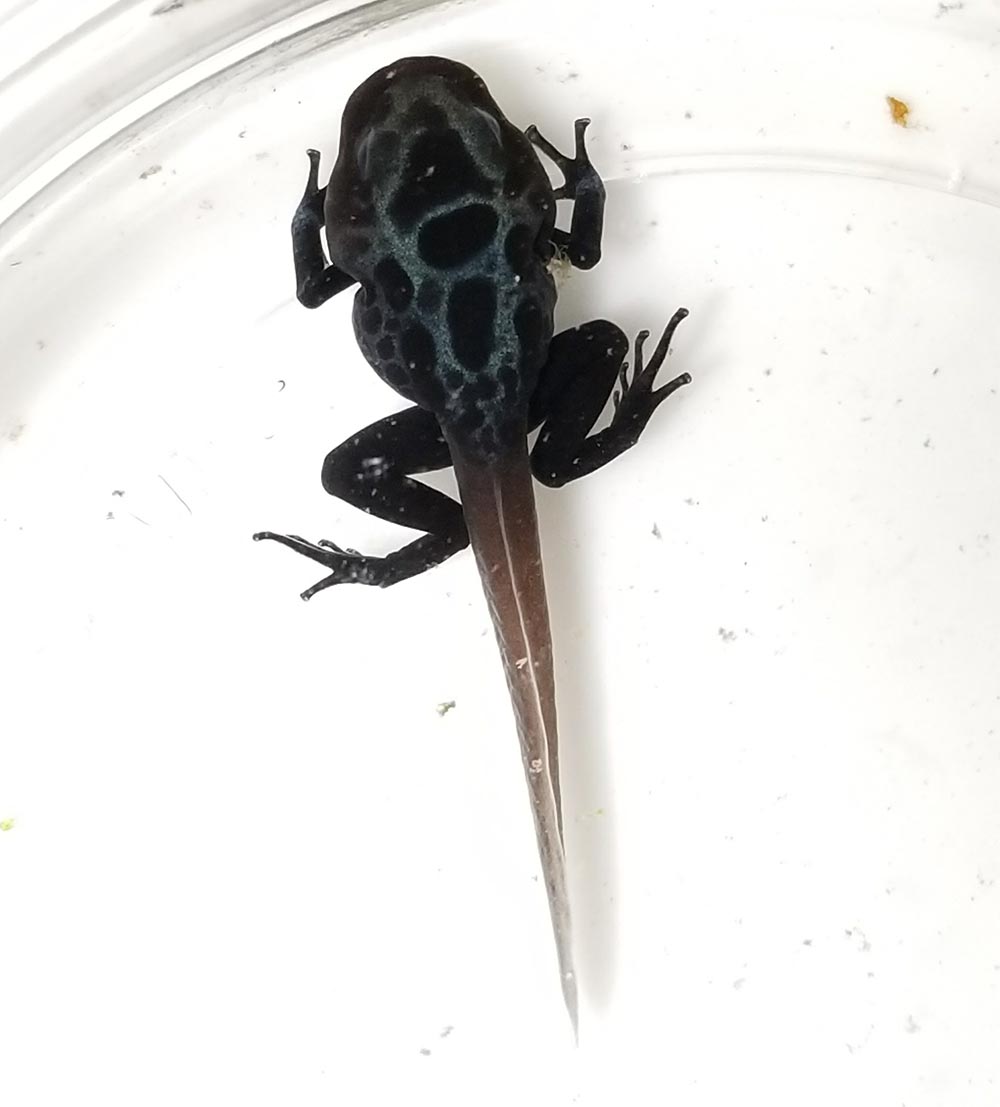 A metamorph, nearly ready to leave the water for a terrestrial life. 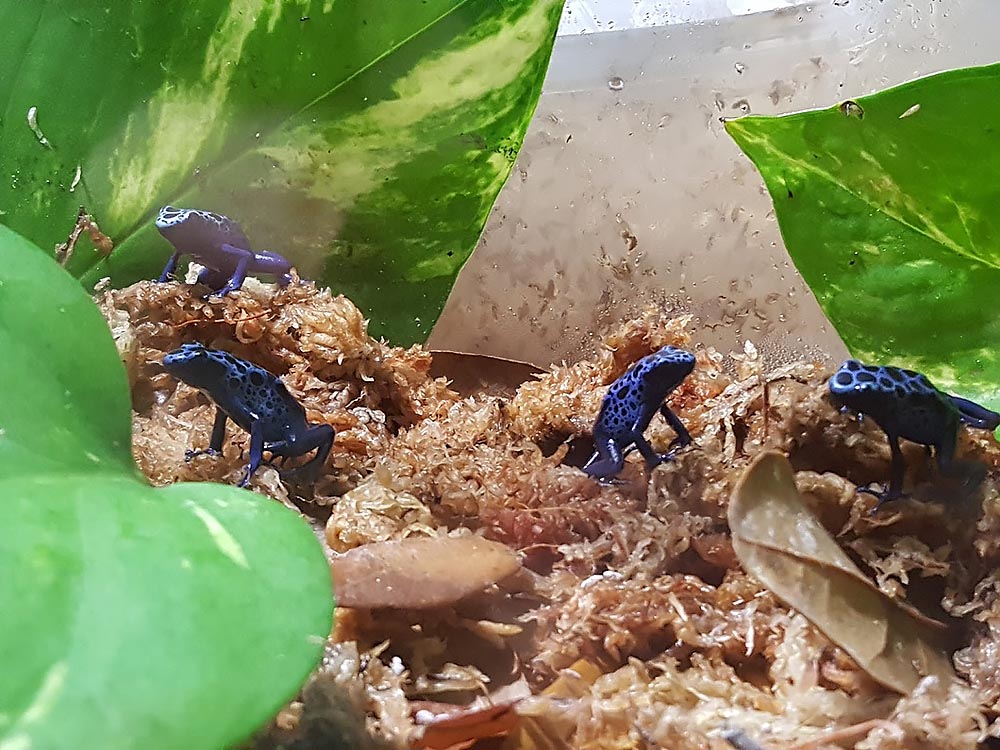 Multiple juvenile Azureus froglets in a small growout tank. Dentrobates tinctorius can be aggressive towards members of the opposite sex, so in the same way that fish keepers may often have to purchase four to six juvenile fishes in order to raise and obtain a compatible pair, so too Dr. Ho had to start with several smaller individuals.

MP: In closing, what are some of the challenges you’ve faced with this vivarium?

AH: Overall I’m really pleased with how this system is performing, but it’s not perfect. My largest hurdle is that I’d like it to be more green in terms of moss growth. But I favor my orchids over the moss, so I have my internal circulation fans on all the time, which tends to dry out the moss. Even if the fan was on intermittently, the point of the fans is to dry out the orchids, which would dry out the mosses too. Ultimately, the mosses that are growing at the bottom of the vivarium aren’t getting hit by the fan, and they do amazing. But things higher up dry out, and the moss get crispy.

Learn more about keeping fishes and terrestrial life together in the January/February 2018 issue of AMAZONAS Magazine: PALUDARIUM PRIMER.