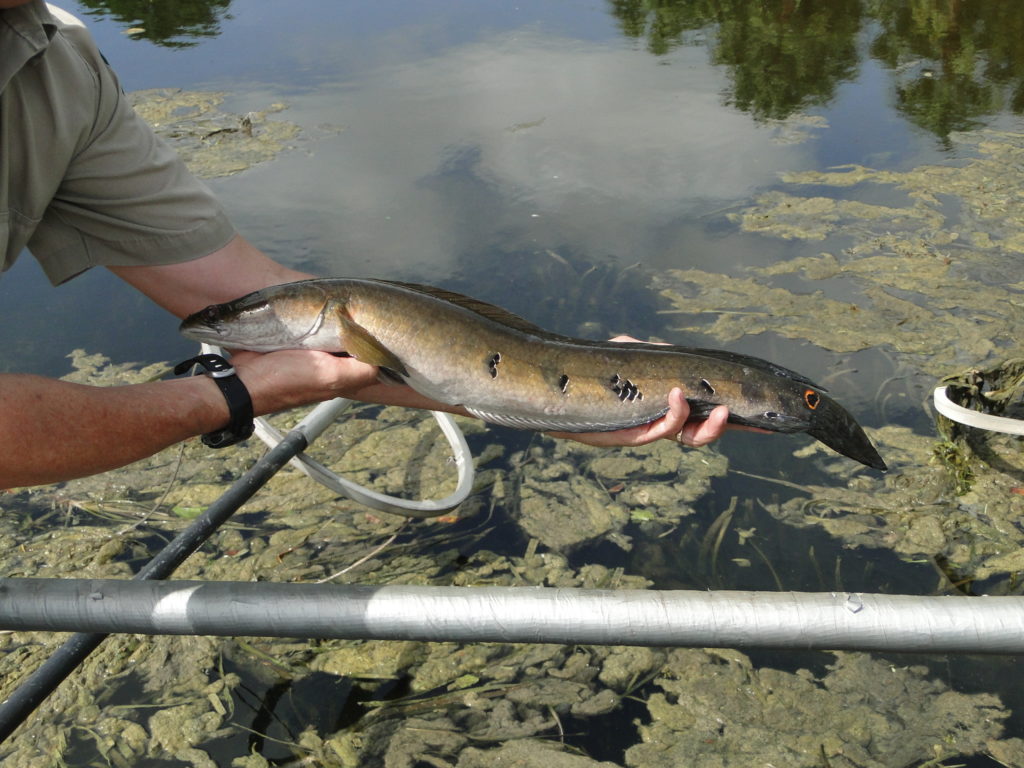 Bullseye Snakehead is a nonnative freshwater fish that was first documented in 2000 in Broward County. These fish are now considered one of more than twenty established exotic freshwater fish species in Florida. FWC promotes the consumption of this nonnative fish. The snakehead’s mild flavor and firm texture make it a chef’s favorite.

September 27th, 2018 – Florida’s native fish and wildlife are facing a serious threat posed by a variety of invasive species found throughout the state. The Florida Fish and Wildlife Conservation Commission (FWC) is taking steps to combat the introduction and spread of these nonnative animals. Today, the Commission voted to approve a reorganization of rules related to nonnative species.

In addition, the Commission requested that FWC Executive Director Eric Sutton and Vice Chairman Robert Spottswood work on a temporary executive order to limit importation of potentially high-risk injurious species. This will act as a stopgap measure while staff develop proposed rules.

“As we are in the process of rule development, we need an Executive Order in place to take the pressure off until we are ready to take the final action,” said Spottswood. 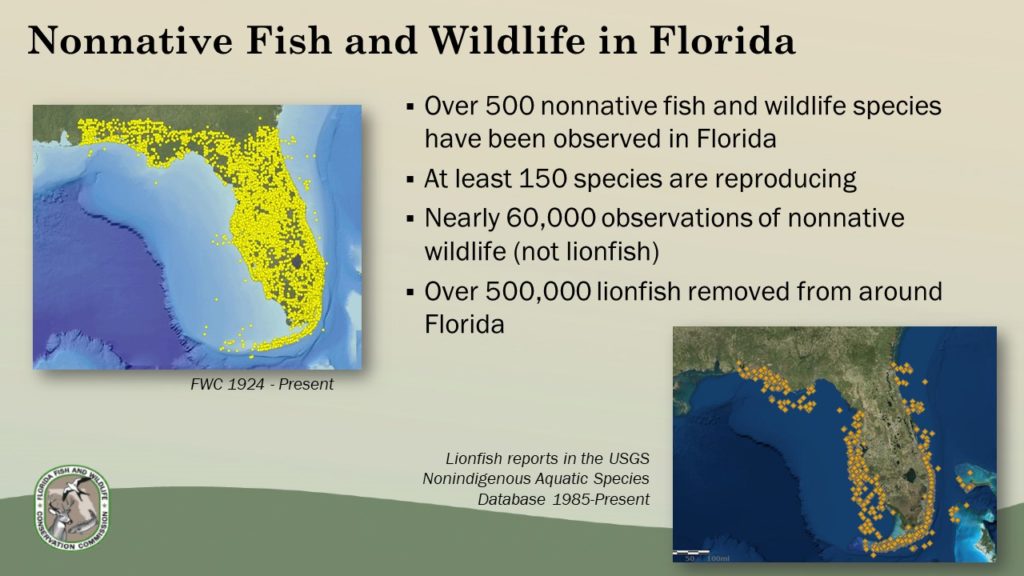 Status of nonnative species in Florida (from the presentation “Nonnative Species Overview and Proposed Draft Rules”).

Invasive species are animals not native to Florida that cause economic or environmental harm or pose a threat to human safety. More than 500 nonnative species have been reported in Florida. Eighty percent of these have been introduced via the live animal trade, with over 120 established in Florida, meaning they are reproducing in the wild. 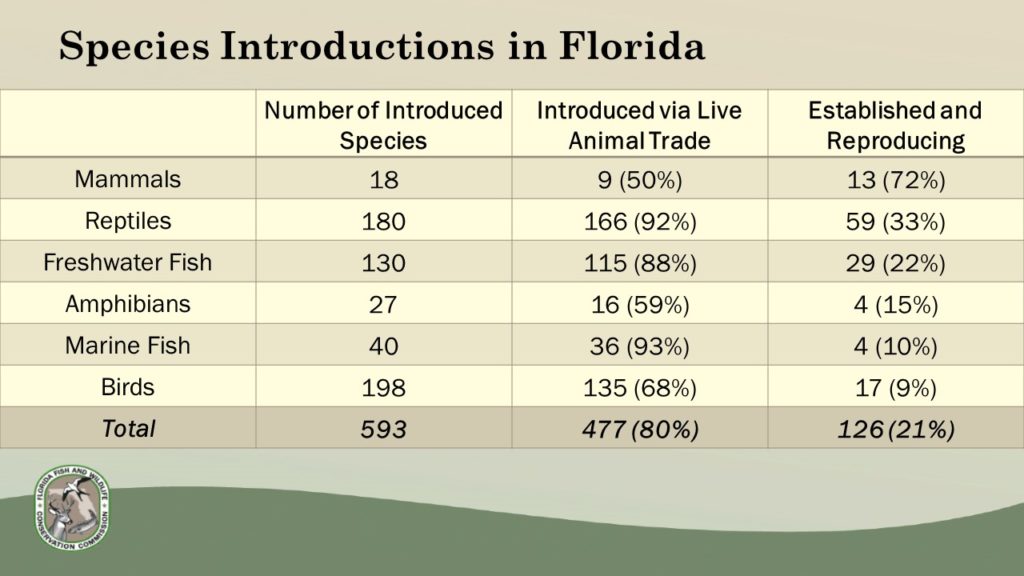 Sources of nonnative species in Florida (from the presentation “Nonnative Species Overview and Proposed Draft Rules”).

“It costs much less to prevent a species from becoming established than it does to control them once they are here,” said Commissioner Joshua Kellam. “What we need to do as a Commission is focus on prevention early on to stop the next wave of invasive species.” 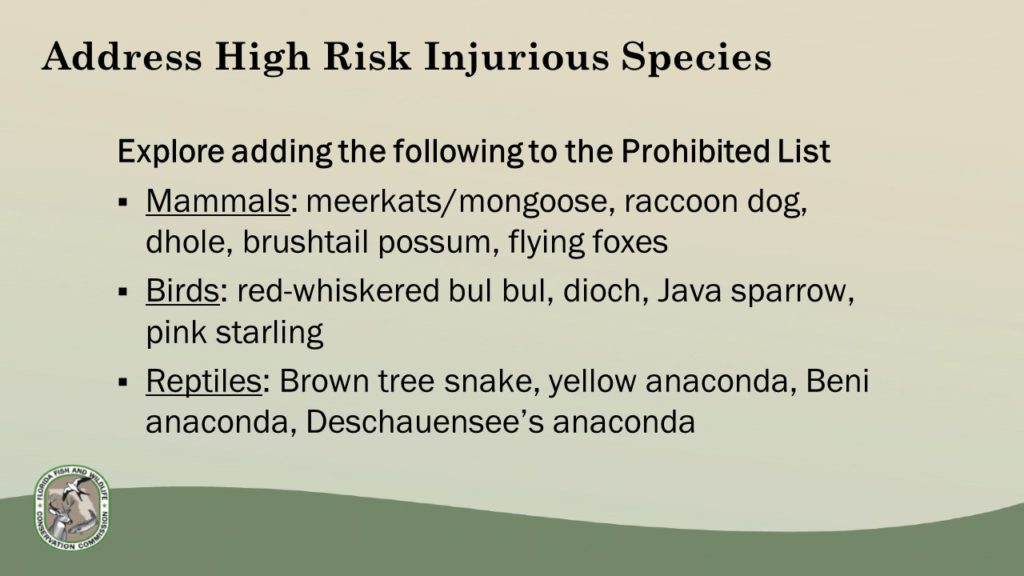 Although invasive species are not a problem unique to Florida, the state’s subtropical climate allows a variety of species, such as pythons, Argentine black and white tegus, green iguanas, monitor lizards, and many invasive freshwater fish species, to thrive.

Most nonnative fish and wildlife find their way into Florida’s habitats through escape or release from the live animal trade. Therefore, regulation is an essential component to prevent nonnative species from taking hold in Florida’s environment.

“We are taking proactive steps through regulation to address those species that pose the highest risk to Florida of becoming tomorrow’s invasive species problem,” said Kipp Frohlich, Director of the FWC’s Division of Habitat and Species Conservation. “Actions we take today can prevent other species from becoming established and help avoid problems similar to the ones caused by Burmese python.”

The public can help the FWC control nonnative invasive wildlife by reporting sightings to the FWC’s Exotic Species Hotline at 888-IVEGOT1 (888-483-4681), online at IVEGOT1.org or by using the free smartphone app IVEGOT1.

The FWC also encourages the public to safely remove nonnative invasive species from the wild when possible. Nonnative species are not protected, except by anti-cruelty law, and can be humanely killed on private lands at any time with landowner permission ­no permit required. People may also lethally remove nonnative reptiles from 22 FWC-managed public lands without a license or permit. For more information about nonnative species in Florida, visit MyFWC.com/Nonnatives.

Editor’s Note: in follow-up with FWC, it was noted that “No aquatic species are a part of the proposed changes.”

We also inquired about the identity of the 4 established and actively reproducing non-native marine species (see graphic above); this number is in reference to the two Lionfish species (P. miles & P. volitans), along with Asian Tiger Prawn, and Orange Cup Coral.

A FWC representative also shared this reminder about how aquarium hobbyists can take steps to prevent the establishment of other invasive species:

“Don’t let it loose! The most important thing that the public can do to stop the spread of nonnative species is to NEVER release nonnative animals into the wild. Be a responsible pet owner. Take the time to learn about an animal before you take one as a pet. In Florida, it is illegal to release nonnative species, including aquarium fish, and doing so can be harmful to native wildlife.

“In Florida, if someone has an exotic pet and no longer wants to keep it, they can call the FWC’s Exotic Species Hotline at 1-888-IveGot1 (1-888-483-4681) for assistance or participate in one of our Exotic Pet Amnesty Days where it can be turned in with no penalty and then adopted. This program includes nonnative fish. Exotic pets can only be surrendered by residents of Florida, but qualified residents of other states are eligible to become adopters. Visit our website to learn more: http://myfwc.com/wildlifehabitats/nonnatives/amnesty-program/.”