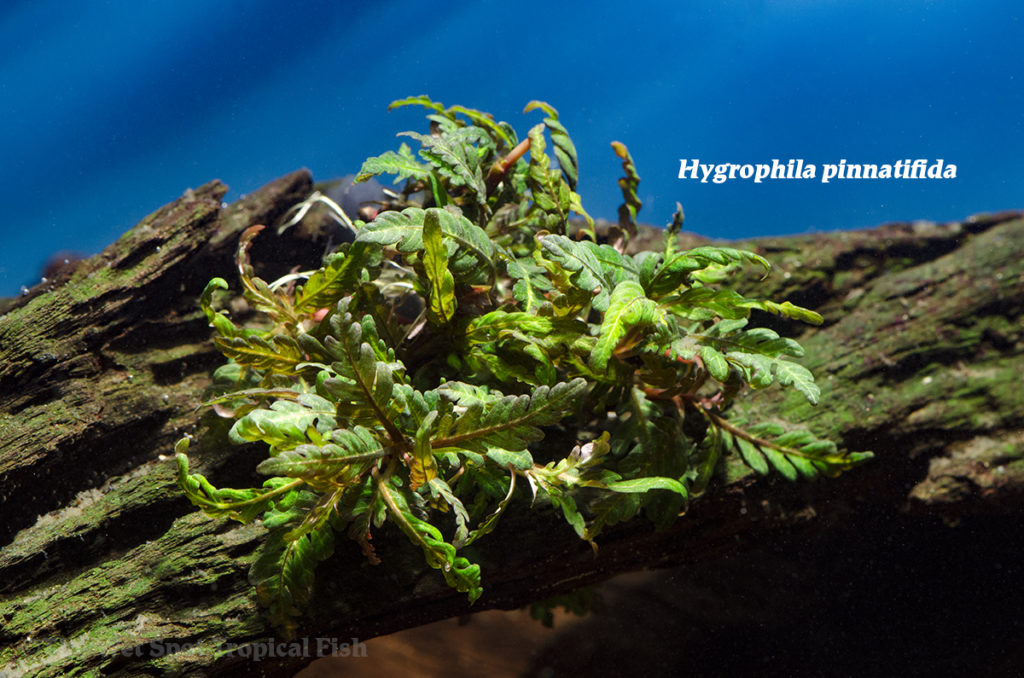 Sometimes, as hobbyists, we don’t want to bother with a plant that requires planting in a substrate or perhaps a rougher substrate was selected for our tanks which is not suitable for delicate root systems. The solution? A sturdier stock to withstand the soldierly attentions of boisterous, food-seeking fish. Several genera of plants come to mind, namely water ferns (Microsorum and Bolbitis), Bucephalandra (known simply as “Buce”) and of course, Anubias. These form the phalanx of what would be considered to be “fish-proof” plants, that last of which is perhaps the most stalwart and “fish-proof” of all. But there is yet another, not often considered alternative: Hygrophila pinnatifida.

The stately H. pinnatifida originates from India (a country which incidentally shares the honor with America as one of the world’s largest democracies). True to its name, the leaves can be described as pinnately-lobed, reminiscent of the leaves from an oak-tree. Like Anubias spp., H. pinnatifida can be attached to wood and rocks, or more commonly, planted in the substrate where it will be firmly rooted against the tyranny of substrate dwelling fish. The robust, olive/crimson leaves of H. pinnatifida are likely to command attention in any aquarium

Unlike other stem plants, cuttings from the top of this plant rarely do well and are less likely to root. Instead, propagation is accomplished by removing side shoots and replanting. It is not fussy about what kind of substrate is used, indicating that H. pinnatifida likely feeds from the water column. Although capable of growing over the top of the aquarium and flowering, H. pinnatifida grows relatively slowly, making it appropriate for smaller tanks. It has a sturdy, almost woody stem that will become woodier out of the aquarium, yet the leaves retain their pinnate appearance. In high-light aquariums, H. pinnatifida stays short and compact, yet grows larger leaves in lower light to take full advantage of all ambient light. Dosing with aquatic plant fertilizers is important, as is the addition of CO2.