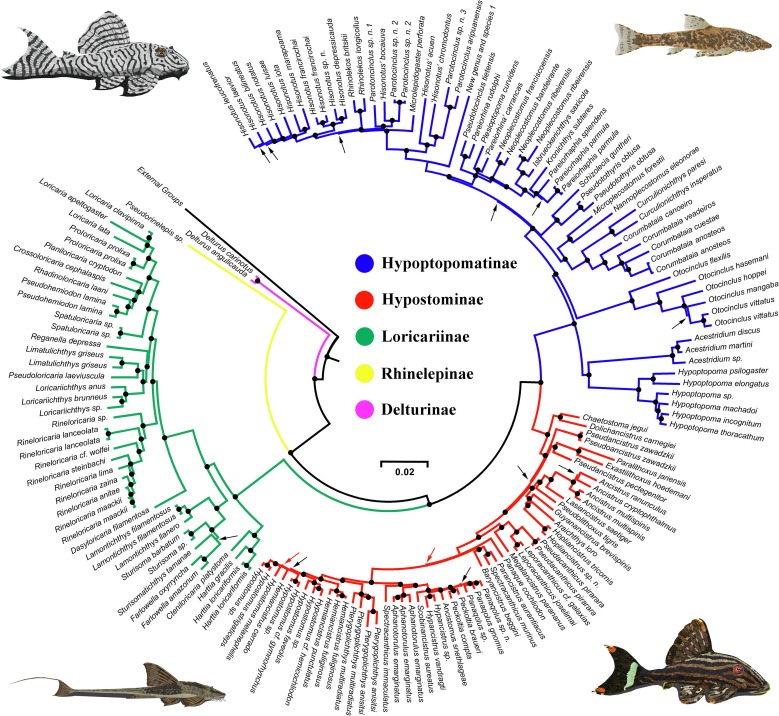 Phylogeny of catfish family Loricariidae with colored subfamilies and species listed along the outside. Illustrations by Mitsuhiro Iwamoto.

Catfish are an amazingly specious order of fish, as many enthusiasts can attest. Even smaller groupings within the Order Siluriformes, the catfish families, are specious. Twelve scientists, spanning four countries (the U.S., Brazil, Canada, and Switzerland), collaborated to collect genome-wide genetic data on 140 species of Loricariids spanning 75 genera. Results of this major collaboration are published in the June 2019 journal issue of Molecular Phylogenetics and Evolution.

So… What are the Results?

When collecting such a large amount of genetic data, there are interesting and important outcomes. For example, the authors found the Family Loricariidae first occurred in the Late Cretaceous approximately 65 million years ago!

In addition, their work supported previous studies describing the armored catfish (Loricariids) as its own family. This is important – scientific research involves falsification. This means a previous study’s results stand until another study debunks, or falsifies them. For example, the theory of evolution has yet to be falsified and so it remains a cornerstone in the biological sciences. Likewise, this study strengthened the family grouping of loricariids and it remains the same.

Further results of this study support currently described subfamilies – meaning they too remain unchanged. In the image above, the subfamilies are color coded. This image, among many others, are included in the journal publication, available here: https://doi.org/10.1016/j.ympev.2019.02.017

All in all, this massive study reaffirms much of what we know about the relationships our beloved armored catfish!