VIDEO: Check out the new HYDROS Control from CoralVue 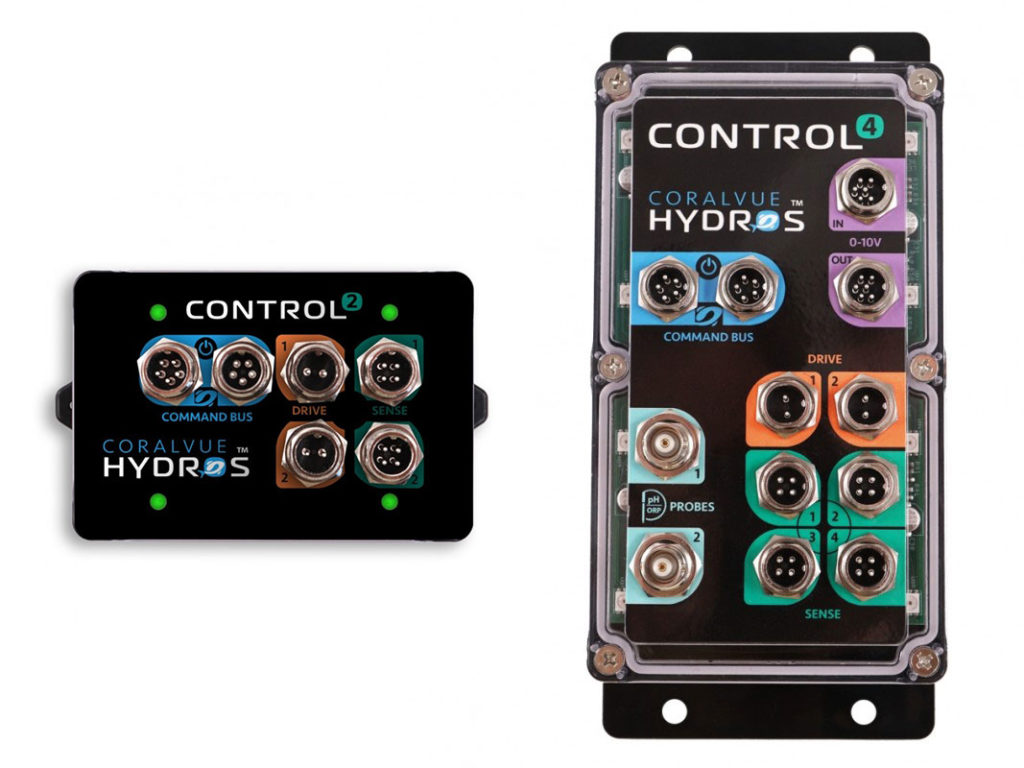 CoralVue introduces a new approach to aquarium controllers with the HYDROS Control 2 and Control 4, as debuted at MACNA 2019.

Get all the control without the clutter.

The new HYDROS Control by CoralVue allows you to monitor and control your aquarium like a pro, even if you’re a beginner. Track temperature, PH, ORP, water level, flow, leaks, outlets, and more–control pumps, timers, level sensors, dosers, fans, solenoids, switches, cabinet lighting, and whatever else you dream up. Check the health of your tank and take corrective action from anywhere using the HYDROS mobile app. It boasts built-in WiFi, smart plugs, and color-coded ports and cables. Add accessories without having to connect extra modules and cords. HYDROS is a system you can grow with! The Control 2 and Control 4 can be used together and are compatible with the HYDROS WaveEngine. 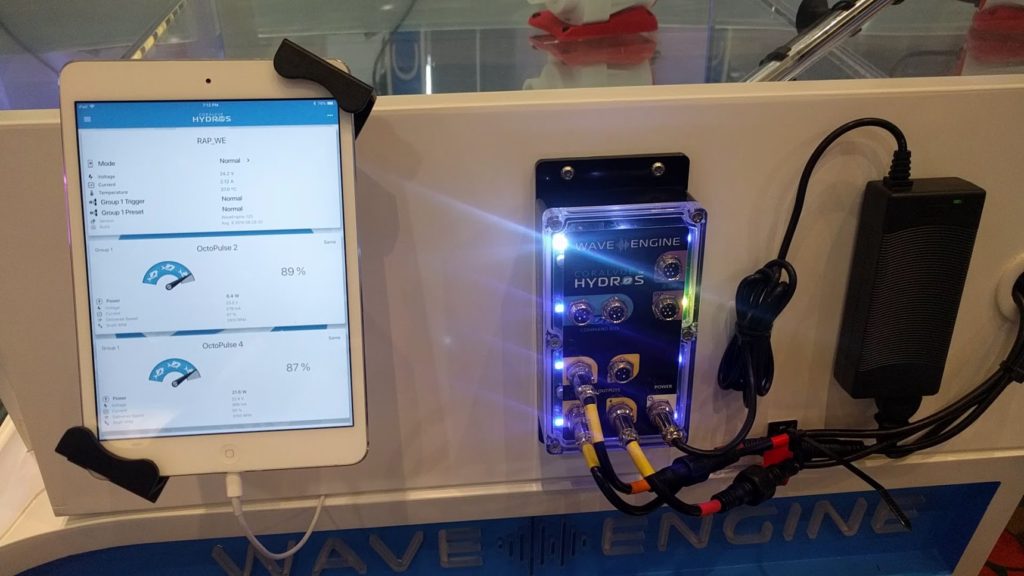 HYDROS Controller 4 and a glimpse of the app, as seen at MACNA 2019

Introducing HYDROS
Aquarium Automation for Everyone

Every HYDROS sevice is a smart device.

HYDROS is different from other aquarium automation systems. Rather than having a central brain, the HYDROS platform is distributed across devices⁠, and each on is capable of being used on its own or together with other HYDROS products as part of a larger system. This means every HYDROS device is a smart device with its own CPU and scheduling capabilities.

All HYDROS smart devices include:

HYDROS Devices will be available in Spring 2020. 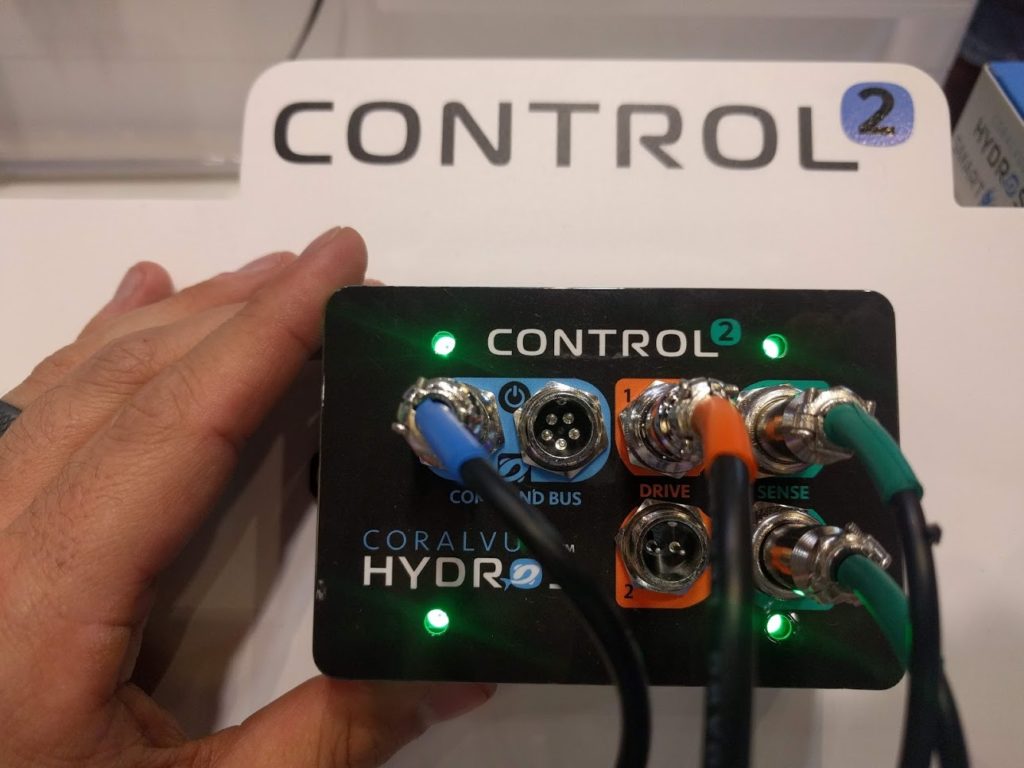 HYDROS Control 2
A small, general-purpose device capable of performing all the main functions of your aquarium. Monitor temperature, leaks, flow rates, power equipment, control outlets, and more. Perfect as a standalone controller for a saltwater aquarium or freshwater planted tank. You can also use the HYDROS Control 2 as one part of a larger system. For example, you can use it to control an auto top-off or auto water change system. 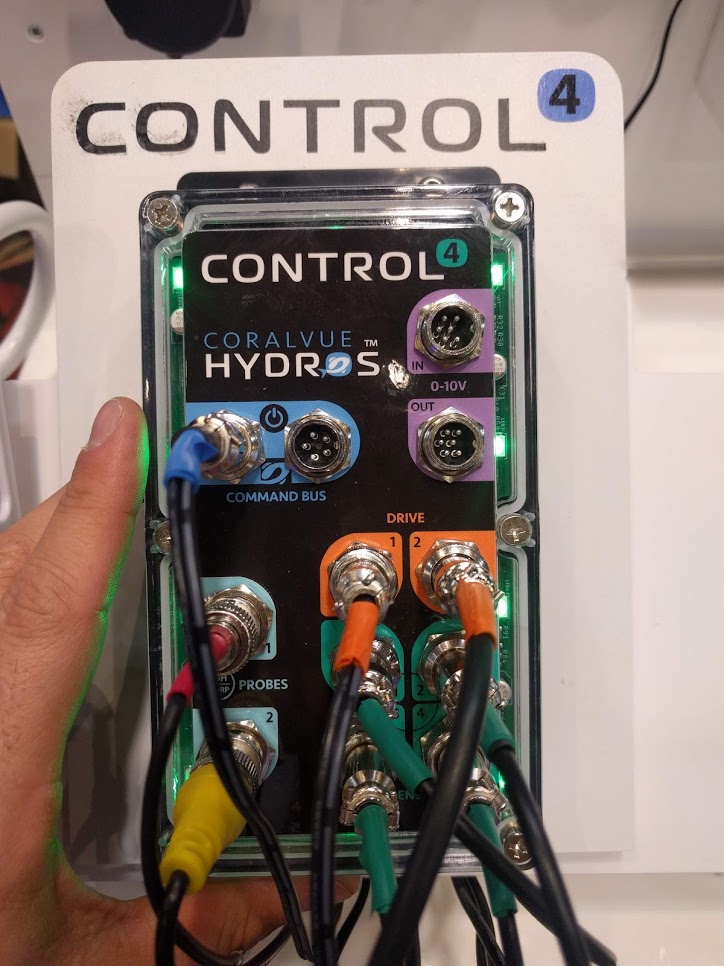 HYDROS Control 4
This is a larger, more powerful device with all the capabilities of the HYDROS Control 2, plus additional ports to monitor, control, and power equipment. Track temperature, pH, ORP, water level, flow, leaks, outlets, and more-control pumps, timers, level sensors, dosers, fans, solenoids, switches, cabinet lighting, and whatever else you dream up. Great as a standalone controller for a saltwater fish-only or reef aquarium, or as part of a larger HYDROS system for a complex reef setup.

HYDROS WaveEngine
This allows pumps from different brands to work together using a single integrated flow management system. Connect DC pumps to the WaveEngine and get rid of individual controllers and power bricks for a safer, simpler, clutter-free solution. The HYDROS WaveEngine can also supply power to other HYDROS devices through the HYDROS Command Bus.

HYDROS WiFi power outlets
The HYDROS Power 4 WiFi Power Strip and WiFi Smart Plug are smart power outlets designed to work with the CoralVue HYDROS platform. The Power 4 has 4 x 120V AC outlets and 4 x USB ports that are WiFi-controllable using the free HYDROS app for Android and iOS/Apple mobile devices. The key difference between the HYDROS Smart Plug and the HYDROS Power 4 Power Strip, other than the number of controllable outlets, is that the Smart Plug can measure the current and wattage of the device it is powering and alert you if it moves out of tolerance.

HYDROS is fault-tolerant to keep your aquarium safe.

HYDROS devices can be configured to be fault-tolerant. Fault tolerance enables HYDROS devices to continue operating properly in the event of the failure of (or one or more faults within) some of its components.

Critical portions of the HYDROS system can be duplicated to ensure that, in the event of a probe or sensor failure, an alternative probe or sensor is available to automatically replace it. Configuring a system to be fault-tolerant adds cost and complexity, but it can also be the factor that saves thousands of dollars of delicate corals in the event of a failure. HYDROS devices can also be connected to a battery backup and will run in a low current mode while under battery operation.

HYDROS is an automation platform you can grow with.

A HYDROS aquarium automation system consists of as many or as few devices as you need–from a single HYDROS Control 2 to a massive system with multiple HYDROS Control 4 units, WaveEngines, and future HYDROS products.

There is no HYDROS “Lite.” You don’t have to start with a “Junior” version, only to replace it later when your needs grow. With HYDROS, you can add a piece at a time according to your current needs and budget. You don’t have to invest in a “full version” with functionality you won’t use now just because you think you might want it in the future.

HYDROS does not assume you have one aquarium, either. You can use HYDROS to develop a distributed system to manage multiple aquariums. Suppose you have a reverse osmosis filter and some barrels in your garage. Add a HYDROS Control 2 to manage and report water levels for you!

HYDROS accurately monitors the health of your aquarium.

All the input/output (I/O) ports on HYDROS smart devices are designed to the highest standards for industrial-grade use. The pH and ORP Probe ports are the most accurate and noise-immune in the aquarium industry. You can read more about these amazing inputs in the versatility section that follows.

All analog inputs use modern, high-quality, dedicated analog-to-digital converters. Aquarium controllers from other brands use low-quality A/D converters that are built into a microcontroller. The timing precision of all HYDROS devices is accurate to 1/100 of a second.

HYDROS is versatile and expandable without extra modules.

Most aquarium control systems use many different types of ports to plug in the various sensors we run on our systems. For example, your aquarium controller might only allow a temperature probe to be connected to a dedicated temperature port, but if you wanted to use an optical sensor to measure water level instead of temperature, you might be required to use a different port entirely. Worse, you might have to purchase an entirely new module to plug in the water level sensor.

HYDROS remedies this problem with Sense Ports, which allow you to connect a variety of different types of sensors to a single port type. That way, you always have the right port available, regardless of the sensor you want to connect. 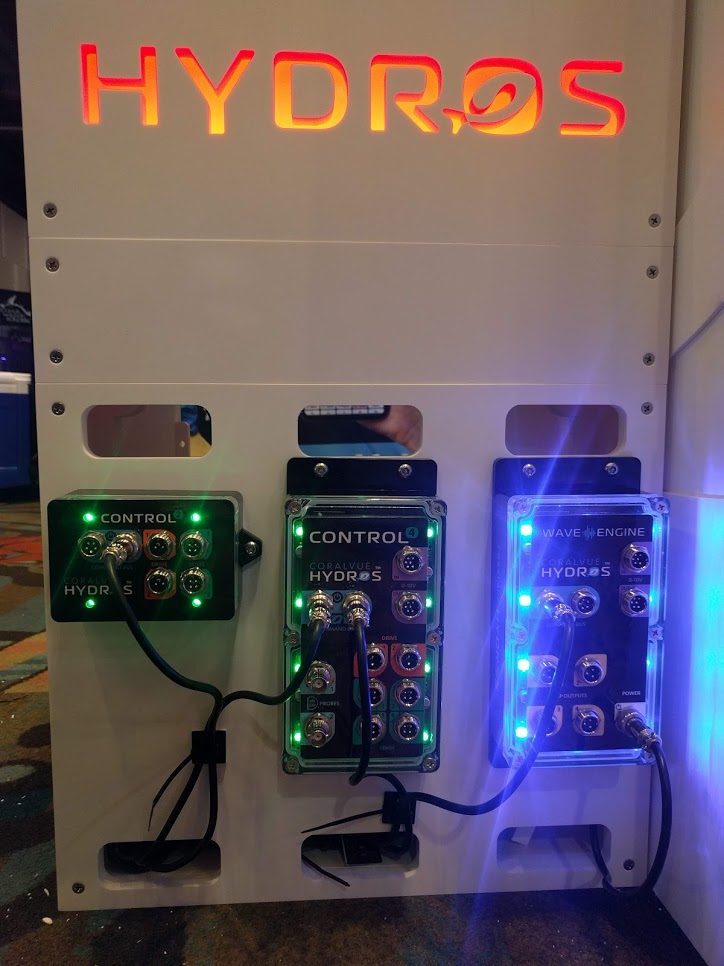 A range of HYDROS aquarium controllers on display at MACNA 2019

The Sense Port is an entirely new concept in aquarium parameter measurement. HYDROS devices include several Sense Ports. A Sense Port is a generic input port that can accept data from numerous different types of sensors. Sense ports currently support:

The Drive Port provides switched 12V DC power for running small lights, motors, pumps, fans, and other accessories. The exact current being supplied by each port is continuously monitored, so if a motor or pump quits drawing current or draws too much, you will be immediately notified.

Accessories that are currently supported include:

One of the most remarkable ports on the HYDROS Control 4 is the Probe Port. You can connect an ORP probe or a pH probe to the Probe Port, but this is no ordinary pH input! The circuitry is based on an ultra-high-quality input chip specifically designed for these types of probes. Each pH input provides digital galvanic isolation from the rest of the system. Galvanic isolation prevents interference with other accessories connected to the system, like motors and pumps. Digital galvanic isolation preserves the accuracy of the measurement by converting the signal to a digital domain before crossing the isolation threshold.

The 0-10V I/O port allows HYDROS to control and receive commands from other HYDROS devices and accessories from other brands. A legacy automation system can provide input via the 0-10V Ports. They can control variable speed pumps. They can also be used to monitor simple switch closures, like push buttons or float switches.

HYDROS is self-monitoring, so you’ll always know your system status.

Every HYDROS device monitors itself. Each device measures internal temperature, power supply voltage, current consumption, wattage consumed, and the status of the CPU and other circuitry. Every HYDROS device output measures the current flow into that output so that you will know if something has failed.

Watch Carlos from CoralVue introduce the HYDROS Control 2 and Control 4 at MACNA 2019: