Imagine trying to attend the ACA, ALA, ADA, AGA, AKA conventions all in a single weekend. Mix in an Aquatic Experience and Aquashella for good measure, and hold it all at one gigantic venue. Sound interesting? Well, get your plane tickets and passports ready. 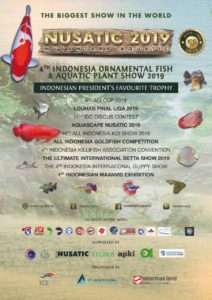 Check out the NUSATIC 2019 show poster.

Promoted as the “biggest show in the world,” The 4th Indonesia Ornamental Fish and Aquatic Plant Show 2019, NUSATIC, will be held from November 29th to December 1st, 2019, at the Indonesia Convention Exhibition (ICE BSD City), Tangerang, Indonesia.

Drawing thousands of visitors at the end of November, NUSATIC 2019 will host a myriad of specialty shows highlighting freshwater fish breeder’s efforts in the pursuit of domesticated fishes. They include:

All this, combined with the general aquarium tradeshow aspect and a sprinkling of marine aquariums for good measure, and you have the makings of a show on a scale probably never seen in a location like the US. The promotional video includes highlight footage from 2018 and is a great introduction to this truly massive and impressive event. Learn more at http://nusatic.id/index.php