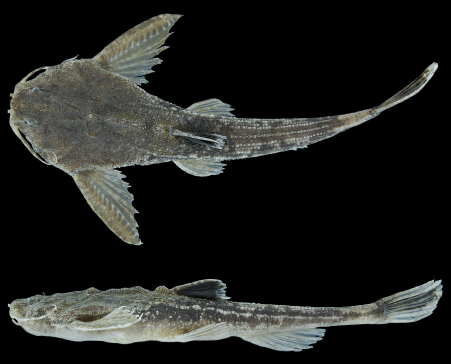 A new banjo catfish has been described from the upper Paraná River basin, Brazil. In a recent paper in the journal Zootaxa, authors André L.H. Esquícero, Ricardo M.C. Castro, and Thiagon N.A. Pereira described the novel species, Bunocephalus hertzi, and provided a redescription of its congener B. larai, whose type specimens were lost.

Banjo catfishes (siluriform family Aspredinidae), as the name implies, are easily recognizable due to their unique body shape. There are 13 identified genera of Aspredinidae, and Bunocephalus is the most speciose genus with 13 described species. Bunocephalus (etymology: buno – bump or knob; cephalus – head, referring to the rounded cusps or bumps on the head) are benthic omnivores that hide in leaf litter or bury in the substrate of the rivers they inhabit.

Bunocephalus hertzi and B. larai appear similar in their coloration. According to Esguícero et al. 2020, both fish have a dark brown head and dorsal region and light brown ventral region. Both exhibit three black dorsal saddles on the body. The first being conspicuous and located at and is as wide as the dorsal fin base and extends to the ventral region. The other two are inconspicuous saddles on the posterior region of the body region. Both species have brown pectoral fins and light yellow with dark blotched pelvic and anal fins. Dorsal fins are dark brown with a light yellow distal portion and the first dorsal fin ray is yellow. Caudal fins differ slightly where B. hertzi has a black caudal fin that is bordered by yellow margins, and B. larai’s caudal fin is yellow at the base with a dark brown distal portion. Both species have light brown barbels with dark brown blotches. 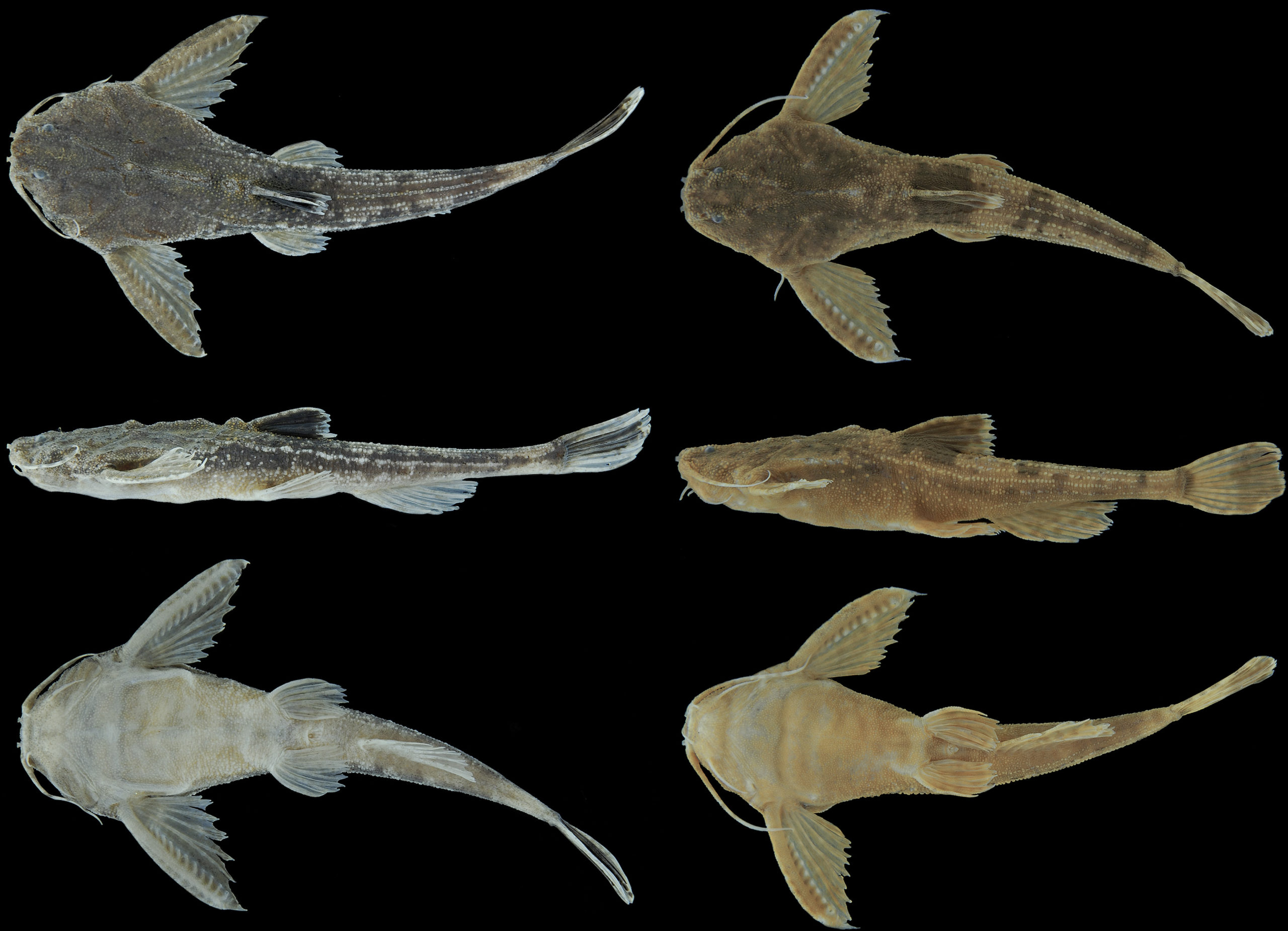 Although the species are phenotypically similar, there are several key morphological diagnostic features to distinguish B. hertzi from B. larai, the only congeners in the Paraná River basin. Bunocephalus hertzi have shorter maxillary barbels than B. larai, whose barbels extend past the pectoral fin origins. Furthermore, the two species differ in skull ornamentation. Both species possess bony protuberances between the posterior end of the occipital and the origin of the dorsal fin, however, B. hertzi has five of such “bumps” whereas B. larai is limited to four. 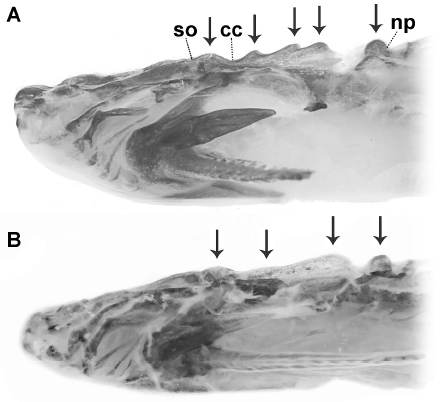 Skull ornamentation of (A) B. hertzi, 47.6 mm SL and (B) B. larai, 53.7 mm SL. Arrows indicate bone protuberances at supraoccipital bone (so), complex centrum (cc) of the Weberian apparatus, and at nuchal plate (np). Image is Figure 2 from Esguícero, Castro, & Pereira 2020.

Endemic to the Paraná River basin, B. hertzi has been recorded in the Pardo, Paranapanema, Paranaíba, and Ivenhema River drainages. Bunocephalus larai has registered occurrences in the Tiete, Paranapanema, and Paranaiba River drainages and in the Paraná River proper near the mouth of the Sucuri River. There is only one record of the species occurring at the same locality at the Córego Nhame, a tributary of the upper Paranaiba River basin.

The main channel of the Mogi-Guaçu River at the type locality of B. hertzi is relatively large (~85 m wide and ~2 m deep) characterized by turbid waters, a bottom of sand and plant-debris, marginal sandbanks, and floating macrophyte mats. The catfish were collected at the river margins among masses of plant debris during the dry season. 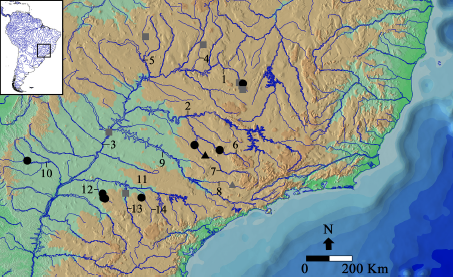 Bunocephalus hertzi, a new species, is described from two tributaries of the upper Rio Paraná basin. Because the type series of B. larai (the only other species of Bunocephalus in the basin) is lost, a redescription of B. larai is also provided herein. Bunocephalus larai and B. hertzi can be distinguished from all their congeners, except B. minerim, by the absence of an epiphyseal bar (vs. present). From B. minerim, both species can be distinguished by the presence of 10 principal caudal-fin rays (vs. 9). Bunocephalus hertzi can be differentiated from B. larai by the longer coracoid process size (11.9–16.2% vs. 6.7–9.8% SL), shorter maxillary barbel (just reaching the pectoral fin origin; 54.6–67.4% vs. 73.7–84.6% HL) and skull ornamentation represented by five bony protuberances between the posterior end of the occipital and the origin of the dorsal fin (vs. four bony protuberances).