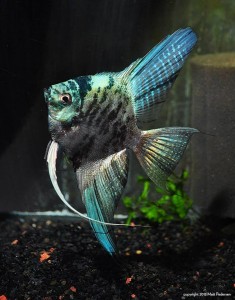 I first became acquainted with Lee Gordon, the aquarist behind Angelmania.net, in 2012 while on the hunt for broodstock for my own Angelfish rearing efforts.  I have always been impressed with the quality of the fish he produces, and the results are evidenced by how often people compliment me on particular broodstock specimens—which often happen to be directly from Gordon’s breeding. (He is located outside Buffalo, New York in North Tonawanda.)

I’ve shared my own artificial hatching methods for freshwater Angelfish in past installments (artificial Angelfish incubation Part 1 and Part 2, and removing angelfish eggs from the substrate for artificial incubation), but I recently discovered that Gordon has documented the entire Angelmania rearing process in a series of videos, which we’re excited to share with you here.

Prepare yourself for a crash-course in artificially rearing Angelfish (Pterophyllum sp.). Gordon’s methods are very different from my own, amply demonstrating that there’s more than one way to approach a problem successfully. Gordon’s techniques could possibly be applied to many similar substrate-spawning fish.

A Second Method: The One-Gallon Hatchery

We should point out that the incubation setups used by Gordon are similar (if not the same) to the one-gallon jar hatchery setups offered by Steve Rybicki of AngelsPlus; if interested in trying these setups, you can get the required foam and risers from AngelsPlus, and gallon jars are pretty easy to come by if you know where to look (I got dozens of them from a friend who works at a pizza restaurant—their olives come in one-gallon glass jars). AngelsPlus has a video of their spawn rearing kit too.

To say I find the methodology shown by Gordon intriguing is an understatement—it offers the ability to keep dozens of spawns together, and yet completely segregated, in one large aquarium. The net result is that one large water change can handle all the young fish simultaneously.

We hope you find Angelmania’s videos as thought-provoking as we did!

Eggs are pulled from parents shortly after spawning. Gordon will surprise you by using straight tap water without dechlorination, and the addition of 10 drops H2O2 (hydrogen peroxide) per gallon, for the first 24 hours of incubation.  A water bath is used to maintain a stable 82F temperature in the 1 gallon incubation jar.

At 24 hours post spawn, Gordon performs a 100% water change by setting up a new jar with straight tap water matched at 82F, dosing with 5 drops H2O2 per gallon.  This covers the next 24 hours.

Gordon repeats the 100% water change at the 48 hour mark, and between this time and the 72 hour mark, fry start hatching.  This video ends with “part 1” of Step 4, encouraging hatching so that fry may be moved to the “fry kit” at this 72 hour (Day 3) stage of the process.

Gordon demonstrates just how robust angelfish wrigglers (or wigglers) really are, filtering them from the hatching jar using a reusable coffee filter, rinsing and swirling them before ultimately pouring them into the incubation jar.  The jar setup is submerged, and they’ll spend the next 4 days in this incubation until they become free swimming fry.

Gordon documents the progress of our clutch as it starts to free swim on their 7th day post spawn.

Gordon harvests and rinses newly hatched baby brine shrimp, and uses a syringe to easily inject the nauplii into the rearing jar.

Gordon again surprises us by showing how he uses the “fry kit” jars right inside growout tanks containing older Angelfish juveniles.  Gordon keeps these babies in the fry jars for the first couple weeks before releasing them into growout tanks.

Gordon rounds out his video series with a glimpse at the fruits of his labor.  Hundreds of wild-cross juveniles feast on a treat of decapsulated brine shrimp eggs.

Gordon capped off the series with an extra bonus video showing how he created and set up his brine shrimp hatching for the hatchery.