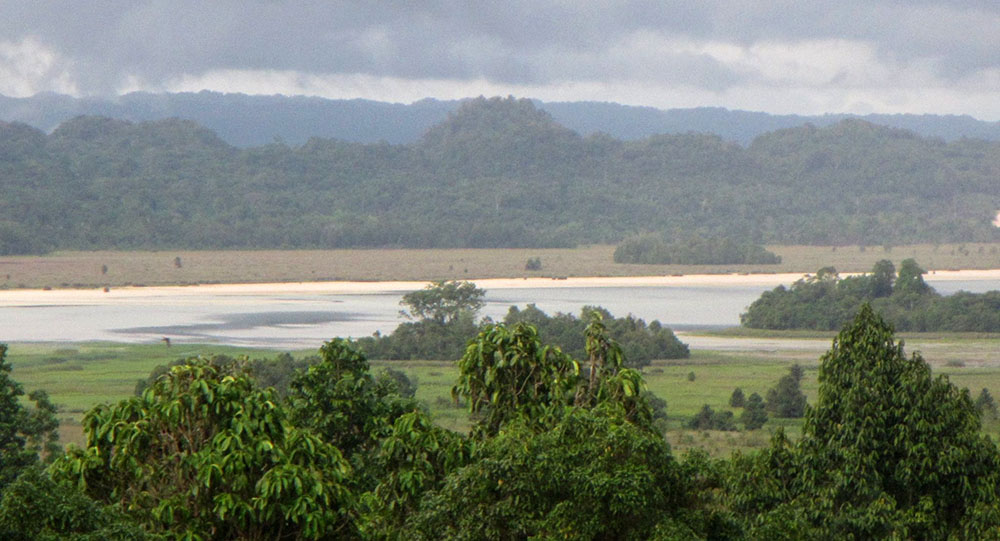 Since its introduction to the aquarium hobby, Melanotaenia boesemani has steadily increased in popularity, and today, it could be considered the most popular rainbowfish in the hobby. By 1989 Ayamaru villagers were catching so many live fish for the aquarium trade the species was on the brink of becoming endangered, an estimated 60,000 male rainbows were capture each month for shipment to Jakarta exporters. Eventually the Indonesian government placed some controls on the industry (Polhemus 2004).

The habitat of this species is subject to broad of fluctuations in water levels. It is thought that these fluctuations have become more severe in recent years, however the main threat to the species was harvesting of individuals (mainly males) for the international aquarium fish trade. It has been estimated that up to 1 million fish per annum have been captured. It is believed that aquarium trade has contributed the declined of these fish in the wild, and they are currently listed as endangered on the IUCN Red List. 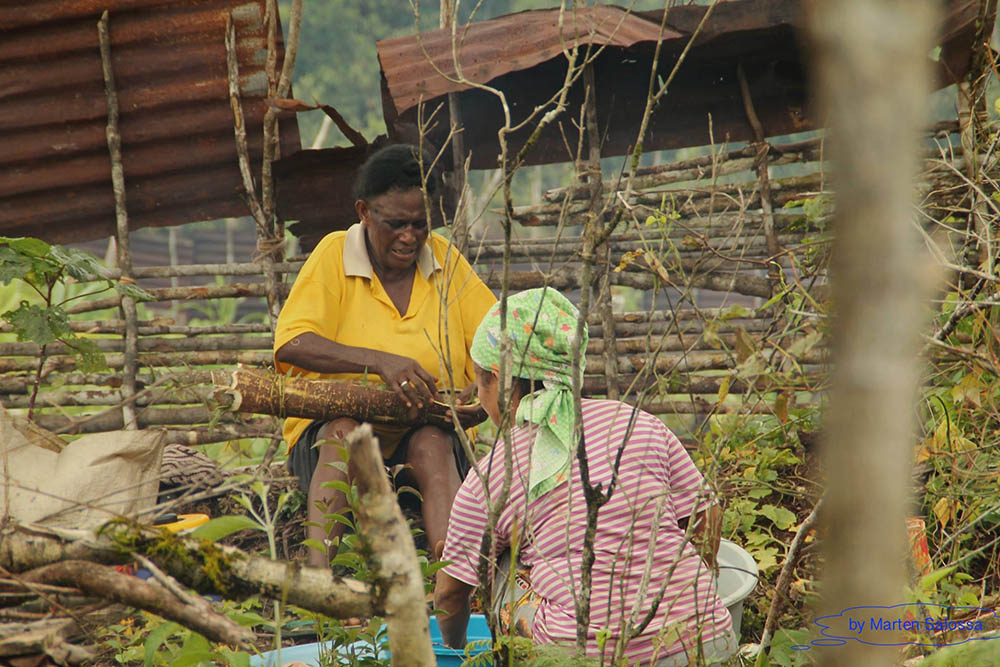 Preparation of traditional food from Mai brat People of Ayamaru Villages, this food used to served by farmers on the field after and before crops – image courtesy Save Ayamaru Lakes / M. Salossa

Most of the people who inhabited the region are Maybrat ethnic group, the local people dominantly work as a farmer and fishermen in the lake, they are still depend their life on the lake to catch fish for daily food and also sell them in the traditional market. 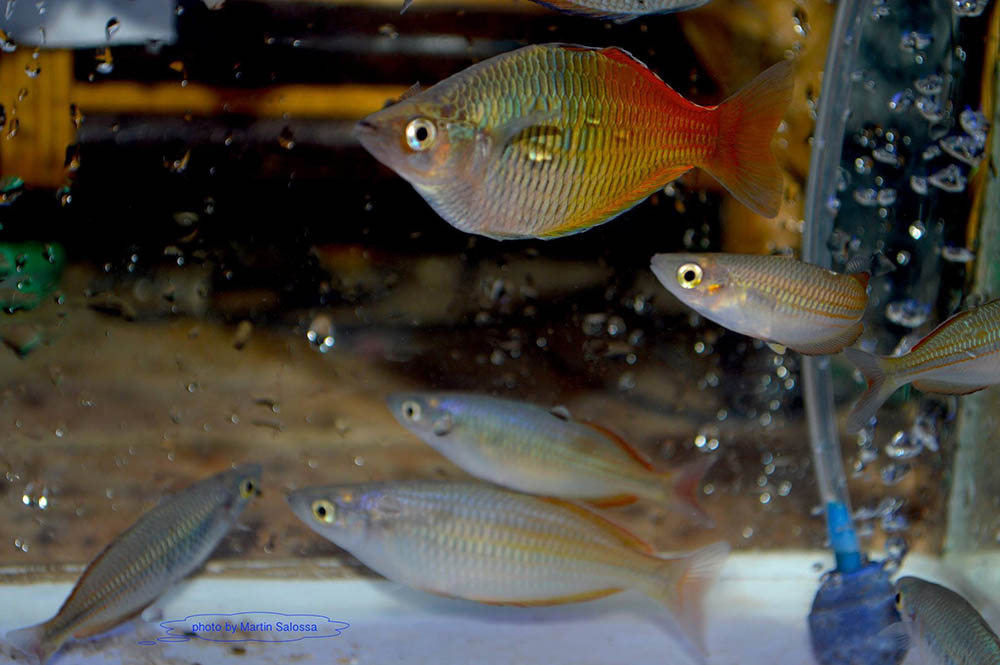 Local people have several names for the Boesemani Rianbowfish in the Maybrat language. “SEKIAK”, also “KASKATER”, and sometimes the more popular “IKAN HIAS” which means “the decorative fish” in Indonesian language.

When I interviewed three villagers of Ayamaru who had been involved in in aquarium fish trade about three decades ago, they told me about their experiences in catching and transport the fish to the aquarium fish trade. The only access to Sorong (the city were this market was located) is by plane via Kambuaya Airport in that region. Since Ayamaru was a remote area it took about 20 minutes to Sorong by plane, whereas they could walk for a day by foot to the port of Teminabuan, bringing the live fish inside a closed tank with battery to operated the aerator. Once in Teminabuan, this box full of male rainbow was shipped to Sorong. The local people sold the fish to the buyers for 1000 Indonesian Rupiah or $0,09 per male rainbowfish; they did not know where the fish would be sent and what they were used for. In fact these fish were packed for shipment to Jakarta exporters. 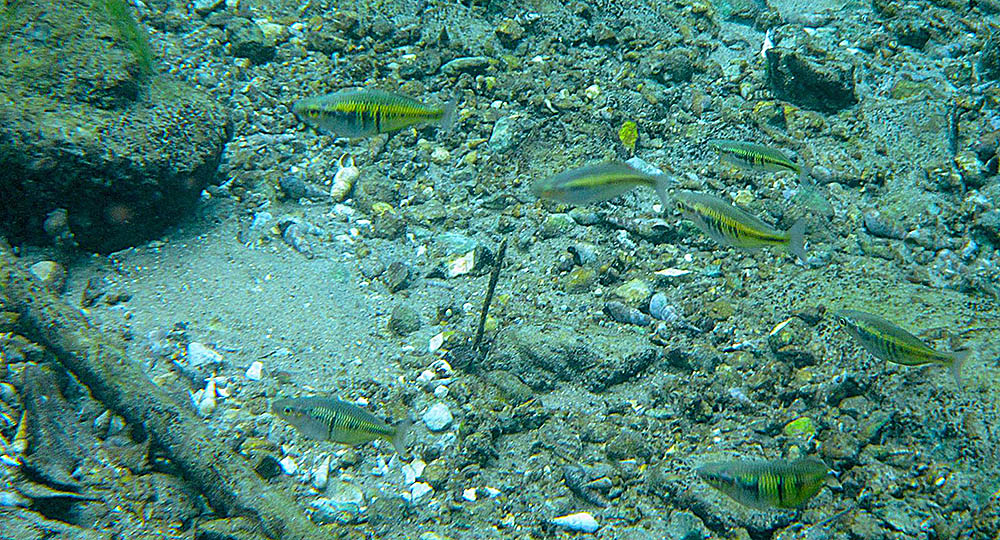 Today most of the Ayamaru villagers, and especially the young generation, have totally forget about their precious treasures, about the story of what people should call “the legend of Sekiak” which is well-known internationally as the Boesemani Rainbowfish. They are never told the story of how this fish once had been made to earn money and profit, nor the price of $0,09 per male. The local government of Maybrat regency, which was just established 5 years ago as a new administrator in Ayamaru, did not know about this fish which can be promoted as an icon for this region and Ayamaru people. 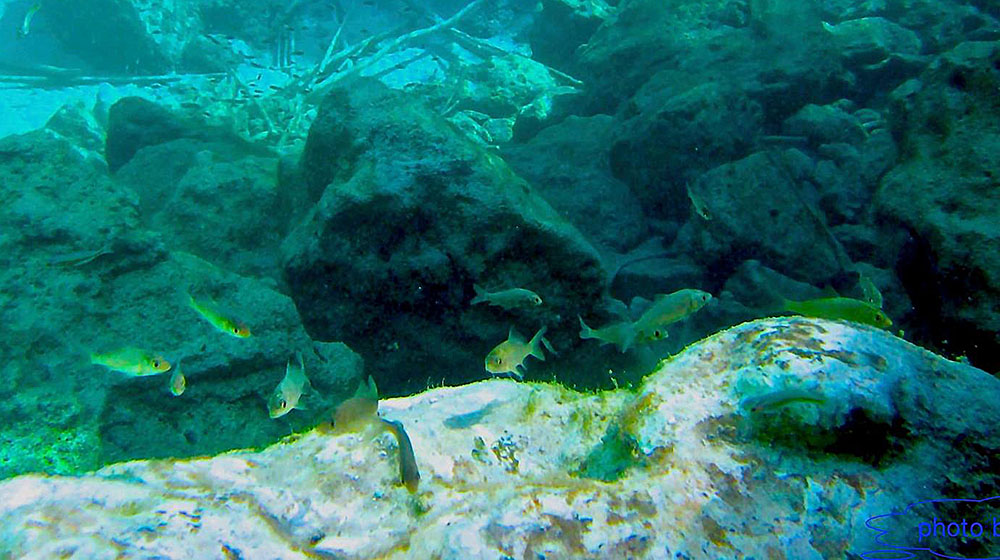 Concern for the Ayamaru Lakes

As for my observation of the Ayamaru Lakes, I can report what I found two months ago when I spent three weeks traveling and surfing around the lake and the surrounding tributaries streams. From my point of view, here are my concerns:

The first threat to the rainbowfish is a predatory Channa species, an immigrant fish brought from Java Island about 4 years ago. It has spread abundantly in the lake and surrounding tributaries streams to the main lake.

The second threat is logging activity by local people and a new road built by the government [which circles] the lake [and] could damaged the vegetation. The government did not analyze the impact toward the environment and water reservoir.

The last threat to the Ayamaru Lakes might be global warming. I believe this influence has increased water temperature and altered the pH of the water in the lake and its tributaries. 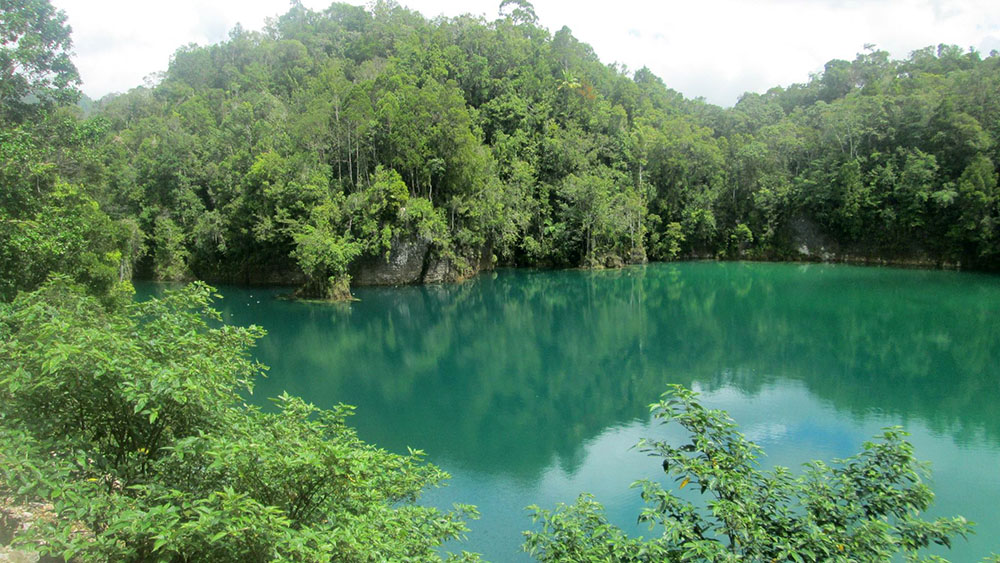 My Project and Goal

The Ayamaru villagers with another community must to know about their treasures, if they have know and realize about this issue then they have to follow-up with to keep the lake protected and save from logging and other threats. We need to educate their young generation and community to understand that if they take care the lake, the lake will take care of them.

I hope that we can at last  make a strong commitment, founded in good will and understanding, with involvement of community and local government. With everyone’s involvement, they can set up a law of conservation and regulation that will be implemented in the lakes and surrounding area for the future. 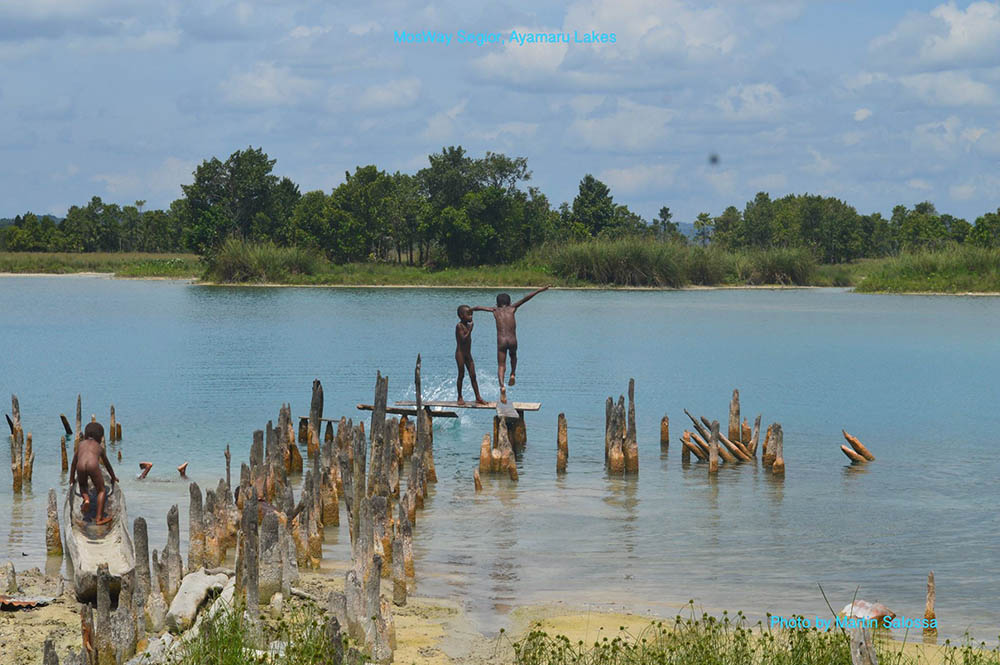 Eventually such measures will be benefit the local people and their [younger] generations who will inherit these treasures, their homeland in secure and well protected, and finally the real habitat of rainbowfish “Sekiak” in Ayamaru Lakes will be safe and survive. 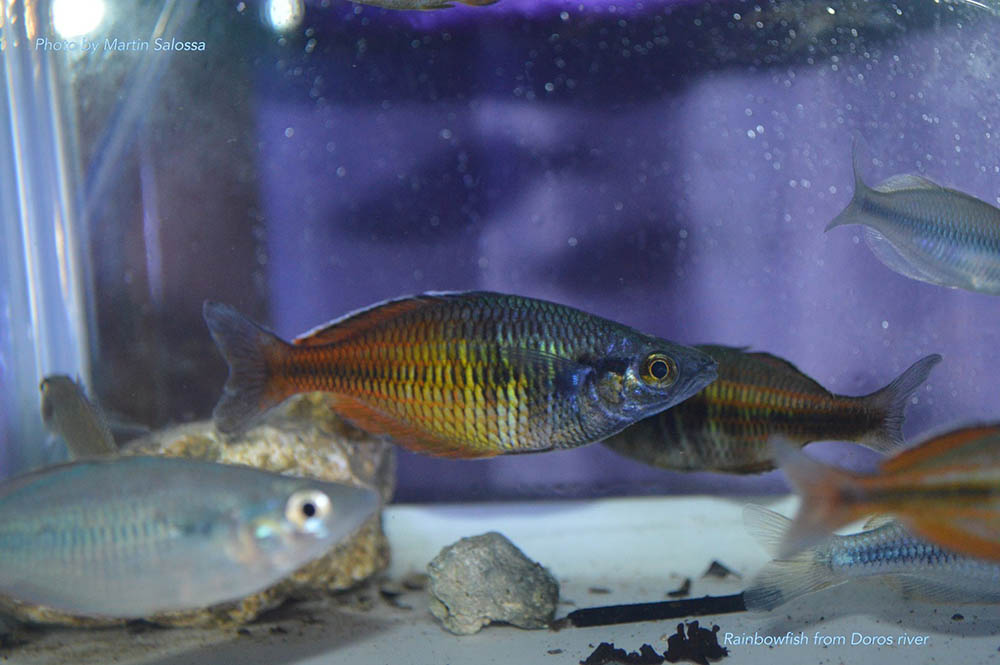 A selection of rainbowfishes caught in the Doros River – image courtesy Save Ayamaru Lakes / M. Salossa

So far I have traveled and surveyed the lakes with limited and simple equipment, collecting data by making movies and taking photographs. This data has been published in my youtube channel, TAMALIN TV. I hope this effort raises your concerns and encourages you to help.

Marten Luter Saloosa is a medical student at Sam Ratulangi University in Manado, North Sulawesi, and a native of West Papua New Guinea. You can reach him via email and online at the Save Ayamaru Lakes Facebook Page.

This guest commentary from Marten Luter Salossa of Save Ayamaru Lakes, Manado City, North Sulawesi, was received 9/18/2014. The original submission was significantly edited for clarity. You can read the original text here.  You can also view some videos from Salossa of Melanotaenia boesemani in the wild here.