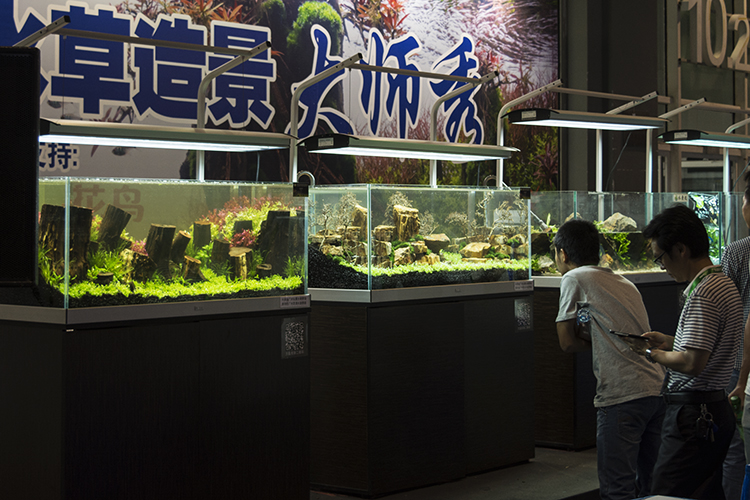 Visitors admiring some of the finished aquascaping demos

First days of a large event like Aquarama are always a bit hectic, and this year’s show—now in a new location—was no exception. Although I had hundreds of photos by the end of the first day, day 2 of the show offered the chance to be a bit more slow and deliberate, taking in the details easily missed earlier. In particular, I was able to focus on the entries of the various competitions being held, especially now that the holding tanks had had the chance to settle for another day and those that had been cloudy (a frustrating, if often inevitable part of any live fish competition) were largely clear. 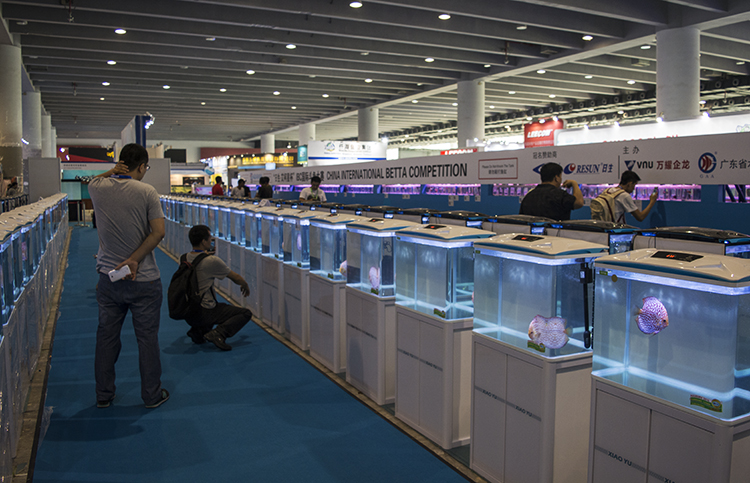 Aquarama 2016 was host to 5 international competitions showcasing Discus, Guppies, Freshwater Shrimp, Stingrays, and Arowana. Each category featured entrants from several countries, and champions were chosen in multiple categories for each species group. Perhaps owing to the show’s new location in China, some of the competitions were not quite as fierce as in days past in Singapore (especially with its proximity to other major breeder countries like Malaysia, Indonesia, and Thailand)—but nevertheless there were a lot of entries. 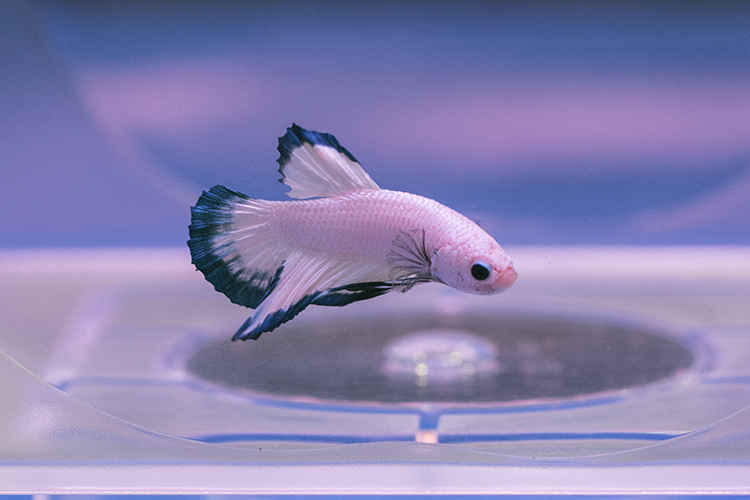 Beautiful shortfin Betta in the competition

For me–coming from the US, where the sale and ownership of the Asian Arowana (Scleropages formosus) is outlawed–the Arowana competition was certainly the most impressive. The sheer size, flawless body shape, and remarkable color on these selectively-bred strains of the ancient fish made for a remarkable sight, and I found myself returning to that corner of the show floor over and over again just to watch these graceful giants swim back and forth in their holding tanks. 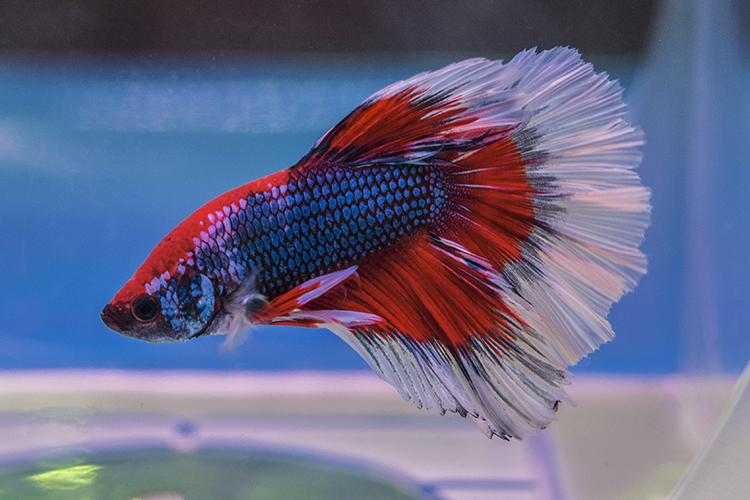 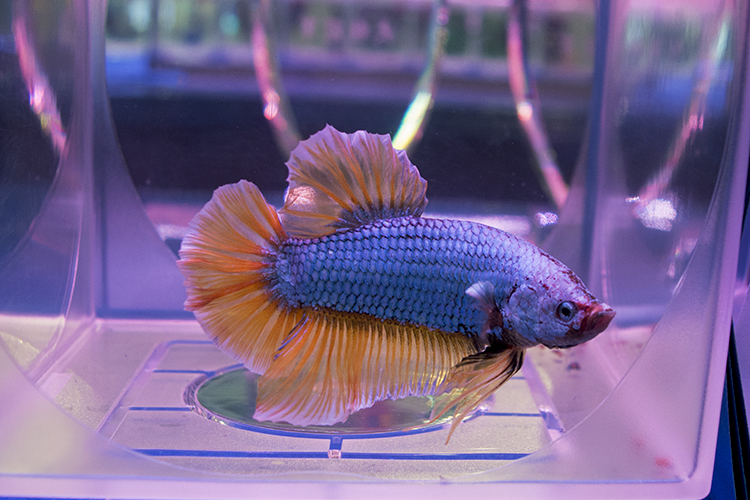 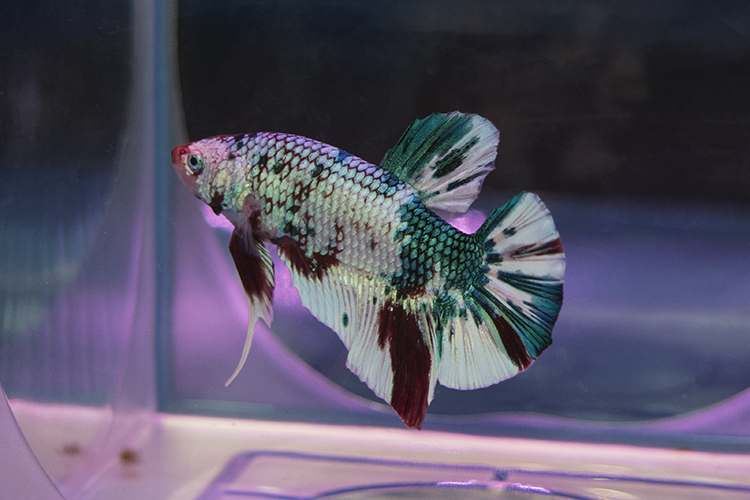 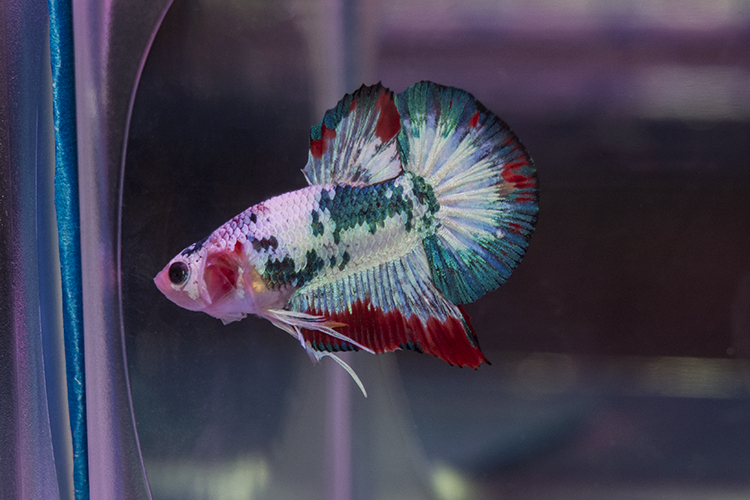 Another Koi or Calico Betta in the competition

The Betta competition also had plenty to offer in terms of diversity of entrants, and it was a reflection of current trends in all things Betta. Again, perhaps due to the location, longfin strains like halfmoons, crowntails and the like were slightly underrepresented in the competition, but a wide variety of plakats and short-finned Betta (the so-called “fighter” breeds) were on display. The prevalence of the recent “koi” Betta craze was evident here, as a large percentage of fish in the show were koi or calico strains. The shrimp competition also made for a fascinating sight, with dozens of strains represented. The explosive popularity of these freshwater crustaceans continues to fuel the development of new and increasingly colorful strains, largely in Asian breeding and exporting countries. Finally, the freshwater stingray competition was a remarkable sight, especially considering that not too long ago, breeding these unique elasmobranchs was a major accomplishment. Now, an entire industry has developed around selectively breeding increasingly intricately-marked specimens. 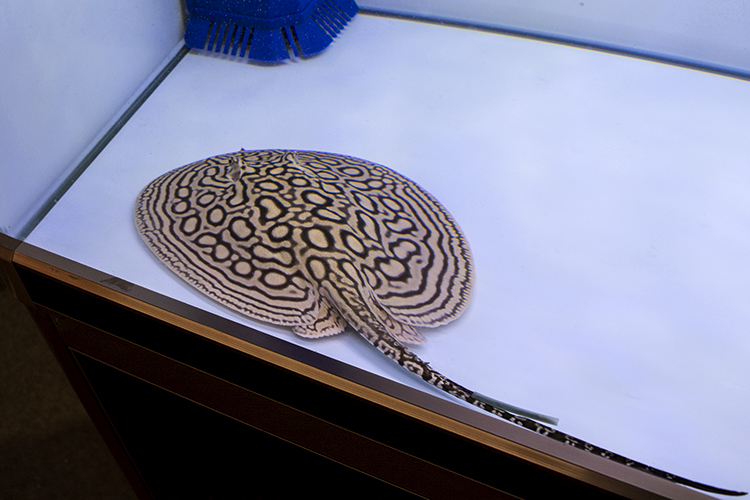 The grand champion of the stingray competition, a strikingly marked hybrid 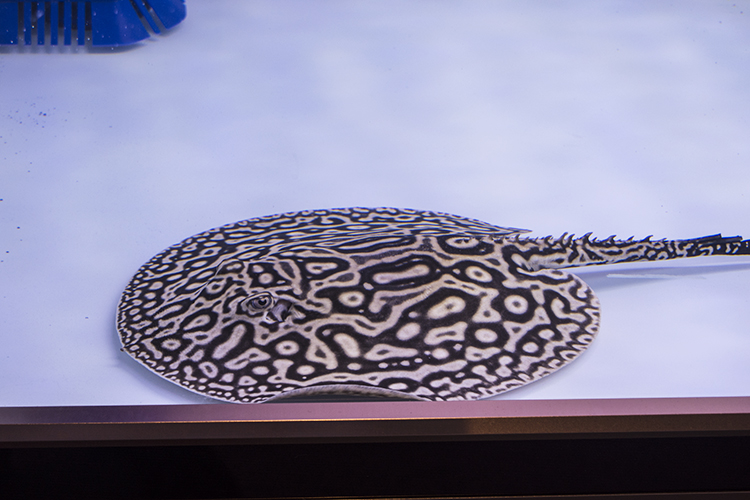 Another impressive ray in the stingray competition 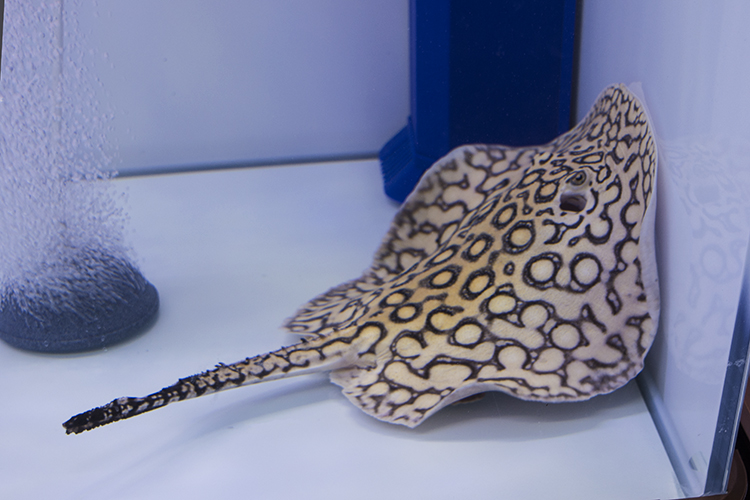 Freshwater ray in the competition 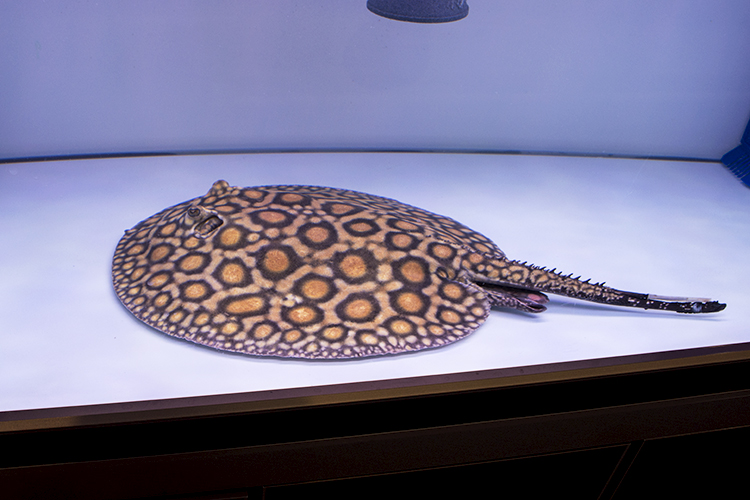 One of the few wild-type rays in the competition, a Potamotrygon bosemani

Of course, the conclusion of the live aquascaping demonstration drew a lively crowd, with world-renowned aquascapers Felipe Oliveira and Oliver Knott showing off their craft to produce some impressive and varied layouts. The art of aquascaping, in many ways invented by the late Takashi Amano, has always had a firm hold in the Asian aquarium hobby, and China is no exception, with many of the exhibitors also displaying beautifully aquascaped tanks in and around their booths. 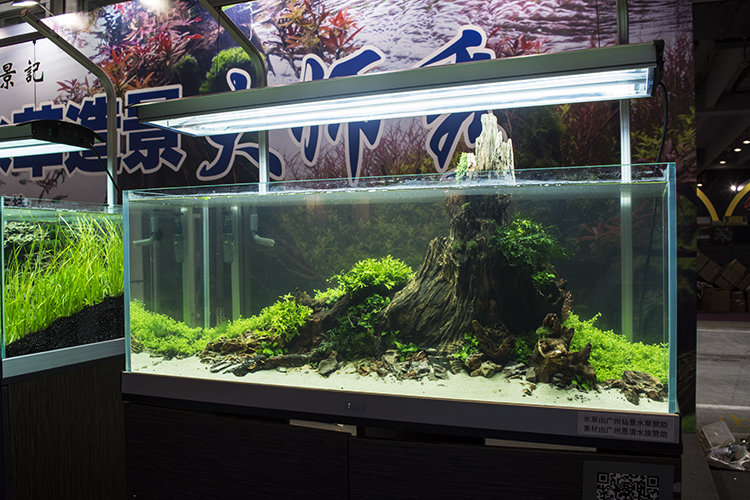 A striking, minimalist layout in the live aquascaping demonstration 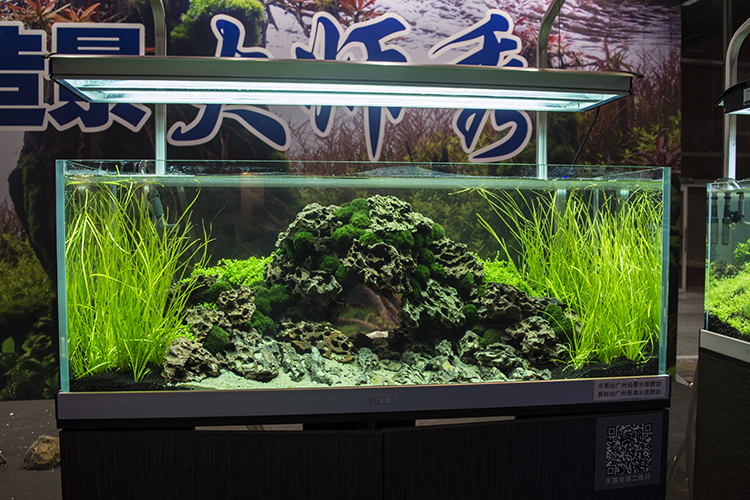 Another hardscape-heavy aquascape in the demo 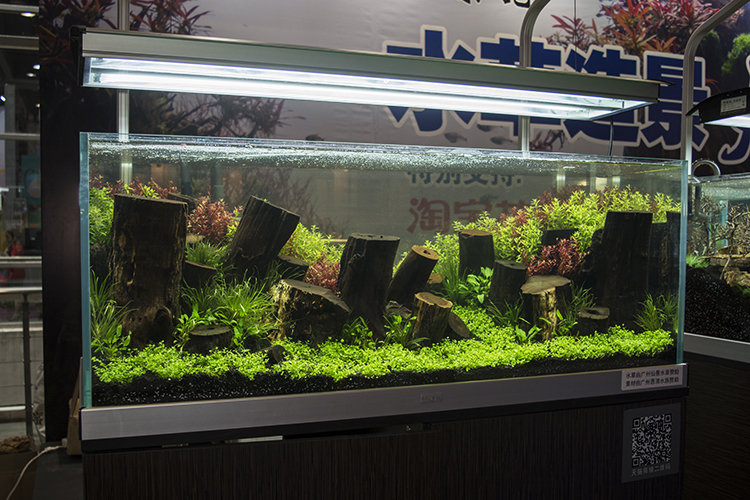 The first of the aquascaping demo layouts to be completed 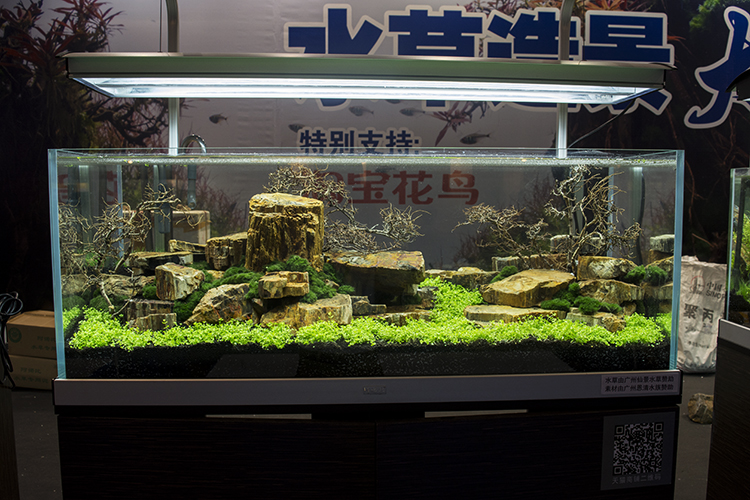 Another completed scape in the live aquascaping demonstration 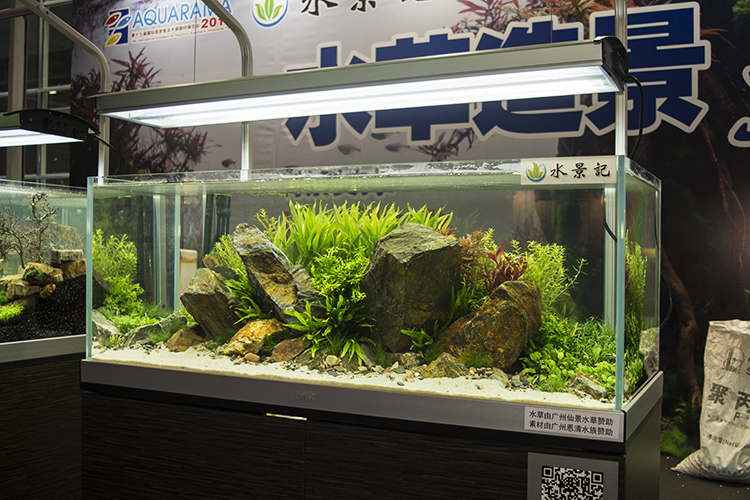 By the end of the second busy day on the show floor, I was tired, but I looked forward to touring fish farms the following day in the countryside surrounding Guangzhou. Stay tuned for more!