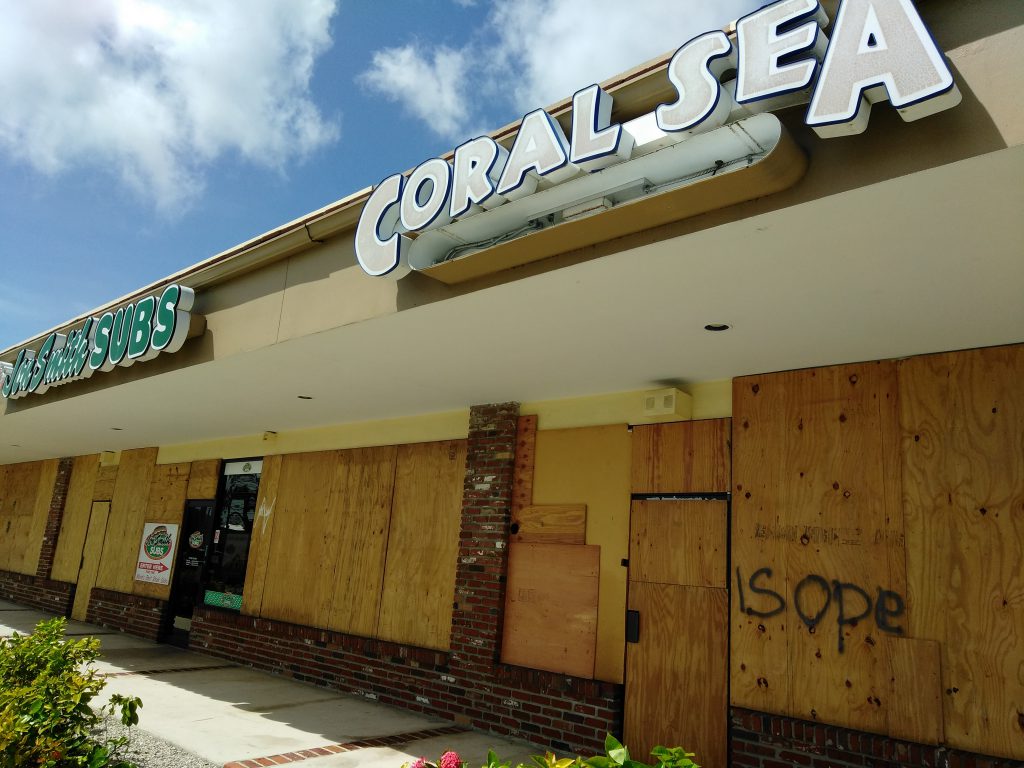 Local fish shop Coral Sea Aquarium in West Palm Beach, FL, boarded up, where new owner James Wood camped out for days in the aftermath of Hurricane Irma. Learn more about their story at the end of Part II of our three-part series. Image Credit: Coral Sea Aquarium

Hurricane Harvey battered the Texas coast while many marine aquarists attended the New Orleans MACNA just hours away. No sooner did Harvey pass than Irma took center stage. While Texas residents were dealing with heavy flooding, the predictions for Irma were catastrophic. As Irma approached the U.S., the preliminary reports from small Caribbean island nations were gut-wrenching. The staff of CORAL and AMAZONAS Magazines waited and watched somewhat helplessly as our friends and colleagues navigated the flood waters in Texas, or prepared for the slow-moving freight train of Hurricane Irma as it barreled down on Florida (one of the main hubs of aquarium industry in the U.S., and the main source of farm-produced freshwater and marine fishes within the country).

As cleanup continues throughout the south this week (and possibly for weeks to come), we reached out to aquarium-related companies in Texas and Florida for a status update, asking them for two quick insights:

As the reports started coming in, some shared good news, while others shared tales of massive work ahead. Many provided insights that will be helpful for any aquarist facing the uncertainty of dealing with a natural disaster.

It has become apparent that rural freshwater fish farmers and marine aquarium livestock businesses located in the Florida Keys may be the most affected at this time [watch Florida Keys Irma aftermath video posted by StormChasingVideo.com on 9/11/17]. But it’s clear that communication is still spotty, and companies are slowly coming back online.

As updates continue to come in, we will update this story on an ongoing basis.

Status: ADG reported in as “100% all good” following Harvey.

Advice: Mike Senske, ADG President, suggested that a lot of common sense preparation can help avoid disaster. The first day of summer, ADG prepares their clients for hurricane season and encourages everyone to consider the following advice. “Obviously, arrange options for back up, and determine back-up energy sources specifically for the aquarium. When a hurricane approaches, don’t feed the fish starting two days prior to storm landfall. Approach freshwater aquarium water changes with caution after the storm. Be safe, and always take care of yourself and family first.” ADG follows up with their local customers after the storm. 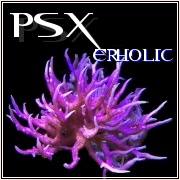 Status: Andre Mueller, a sponsor of MARSH (the Houston area reef aquarium club), checked in with us on Tuesday this week, deep in the process of rebuilding following Harvey. “I was affected by the flood. While the water was rising in the house I was able to work all night long on the tank to run it and keep it alive, since the mission that night was holding the tank, at least up until flood water would enter the display tank!!! While having the garage flooded, I mounted the emergency generator on a workbench in the garage and ran extension cords through and along walls to the tank. As things got worse, I reconfigured the tank a bit since the water level of the flood reached the level of the sump; I converted my frag tank into a sump to run the skimmer in it. I then dismounted the APEX, dosing pumps, CaRX, and anything else, and operated the tank in the manual, old-fashioned way for 2 more days until I manually brought the CaRX back in.

“Just yesterday I was able to put the APEX system back in and most other system components. The next challenge is to relocate the entire 210-gallon display tank (full of exotic SPS) away for the rebuild of the house while still keeping the tank in operation. But before that occurs, the drying equipment for our home will challenge the tank temperatures, likely starting today.

“I have gotten some help from a local company, Urban Aquatics, and the owner David Rains helped me out with a 1HP chiller system and delivered a flooded 300 Deep Dimension tank, which I will make a new system out of within the next 2 weeks. So that is quite some work and pressure for me. I will make a swap from one tank to the other with no cycle, basically a relocation, which I have done before successfully.” 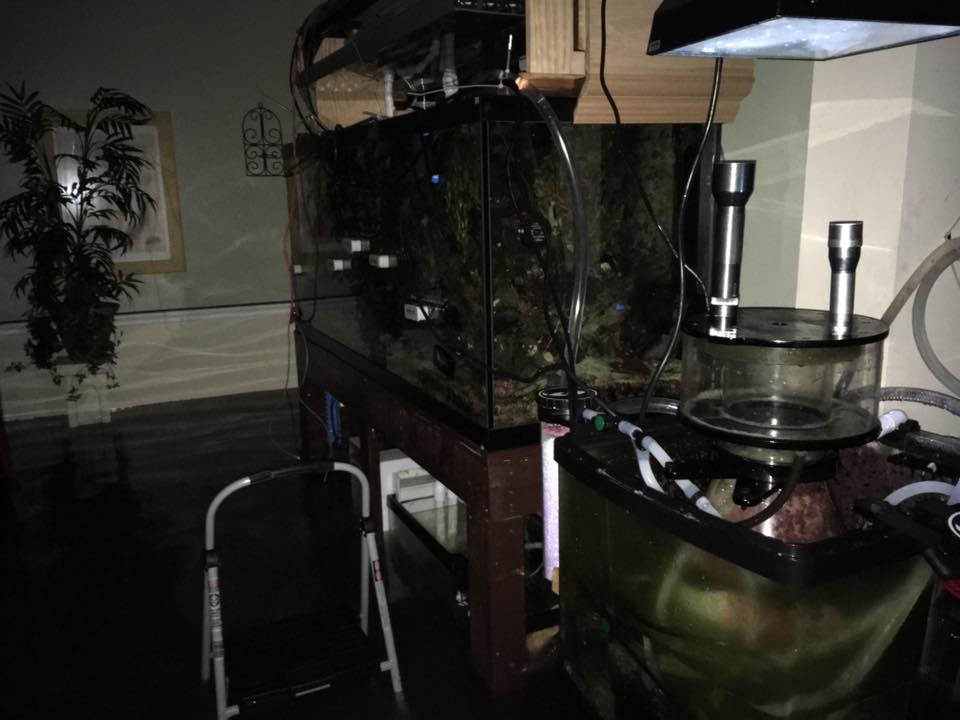 Status: Charles Clapsaddle, the well-known fish breeder at the helm of Goliad Farms, found time to check in with us on Wednesday evening. The report from Texas: “We were hit by Hurricane Harvey, but suffered relatively minor livestock losses. We will, however, incur significant time and costs rebuilding and returning to normal operations. For information about our damages and recovery, please see http://goliadfarms.com/hurricane-harvey-recovery-september-12th/. We’re recovering slowly. We have lots of vats to clean and inventory, and we also have to prepare for winter by re-covering the greenhouses.”

Hurricane Wisdom: “Looking back at our experience, next time I’d ensure our generator was well tested and would have more spare parts online. When it comes to saving fish in a power outage, surface area is important. If you have large, sturdy, low-profile containers (think cattle water trough), move the fish outside into them. This obviously doesn’t work for winter storms, however.”

Goliad Farms is known for its unique plant-based recirculating filtration systems, which were completely trashed by Harvey.

After Hurricane Harvey, Charles Clapsaddle finds himself wiring up new circuits for well, freezers, refrigerator, and chargers, with a tattered greenhouse in the background.

With both storms now behind us, it seems that a bit of luck spared many aquarium businesses from devastation, but losses certainly occurred. The USDA has published a bulletin for all farmers, which includes fish farms, discussing crop losses; no doubt some companies will be involved in this process. While most local fish shops may see some insurance coverage, oftentimes livestock is not covered; these losses could be devastating for some small businesses. In Florida, ongoing concerns remain now days later, with continued power outages compounded by searing heat and sweltering humidity. And the mosquitoes.

Continue to Part 2 of our coverage.