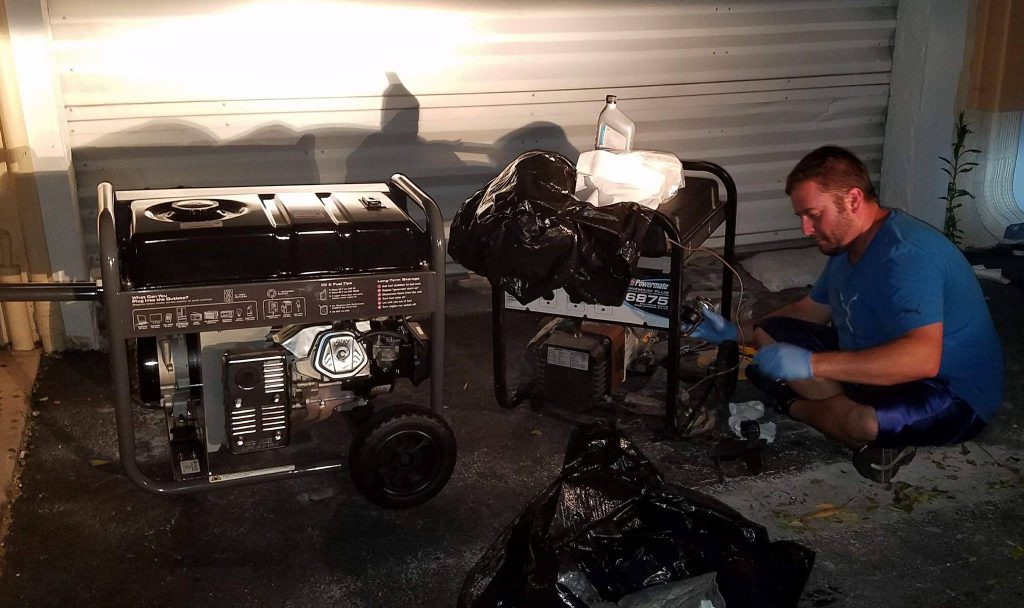 Jonny Ugalde helping Hydra Aquatics repair one of their 3 generators – the new one in front was loaned to Hydra by Matt Jurgensen when the original generator started to act up. 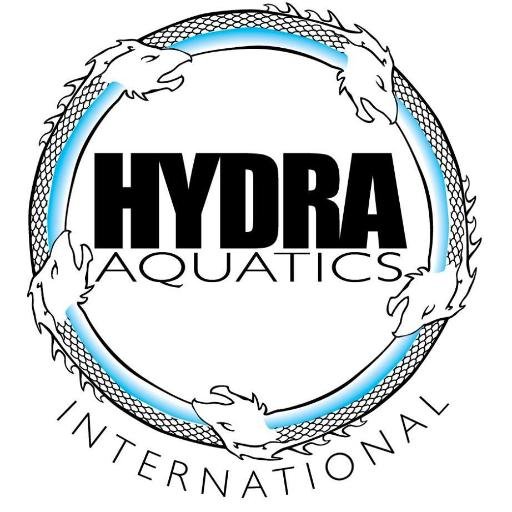 Status: Co-0wner Ian Eisenberg posted this correspondence, highlighting the team effort it took to keep things going. “Hydra Aquatics lost power during the storm. Thanks to the prep by Robert Hydra, Hector Gonzalez, and Cheryl Hydra, who ran extension cords and prepped a generator, and then manning shifts to keep it running afterward, we had minimal losses. We only lost a few fish, mostly to jumping apparently.”

Cheryl Hydra also weighed in on their experiences. “High temperatures were the hardest part to battle, even with a generator. We were without power for 5 days. We were very fortunate to have only minimal loss – the local community was amazing. When one of our generators started to fail, fellow hobbyist Matt Jurgensen—while he was driving home from Jersey—saw our post & told us to go to his house in the middle of the night & take his brand new generator. The lesson learned about our original generator is you can add too much oil—thankfully that was all it was.”

On Mitigating Risks: “We also took corals home to our personal tanks to ensure minimizing the impact to stock,” shared Eisenberg. “My personal system is on a generator and never lost power except for a problem with my Apex (a story for another time), but a power pole fell and is blocking my street so I was unable to leave until late yesterday, 9/12.
Our power came back on at the shop today (Wednesday, 9/13). All in all, I think we fared amazingly well!” 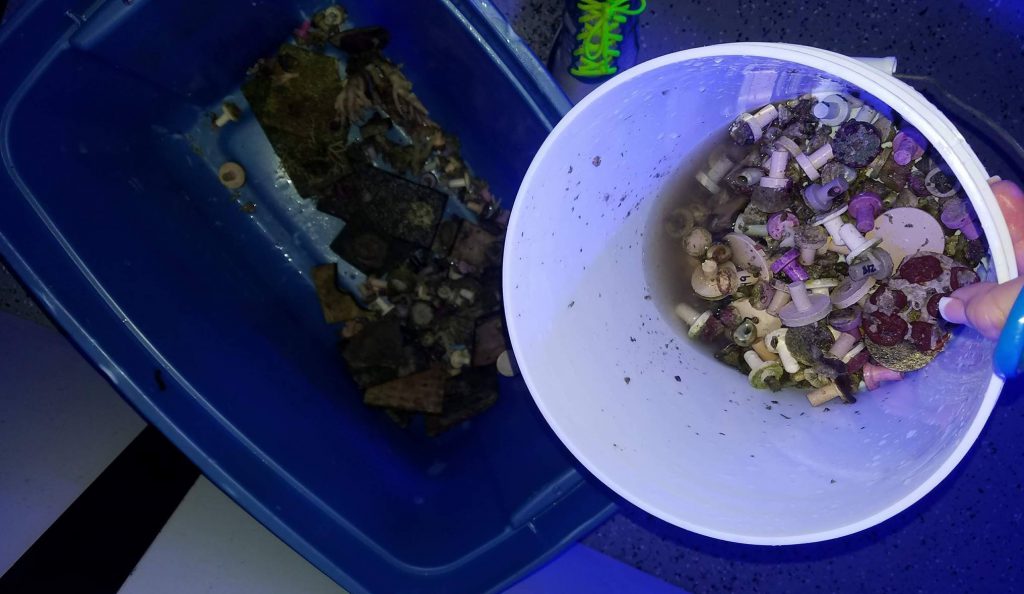 Losses at Hydra Aquatics were mainly SPS coral frags, mostly Acropora, but a few from other genera as well. 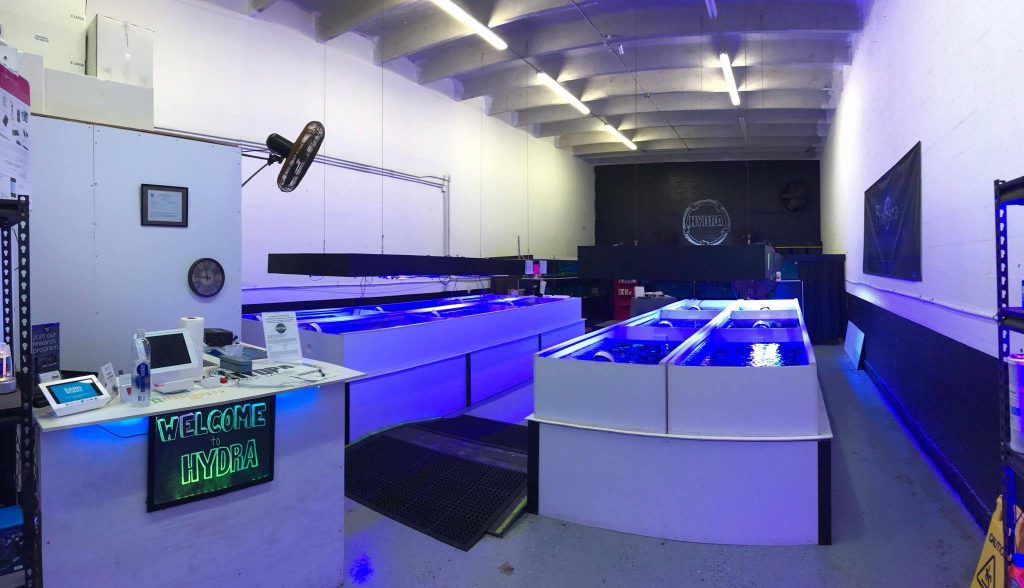 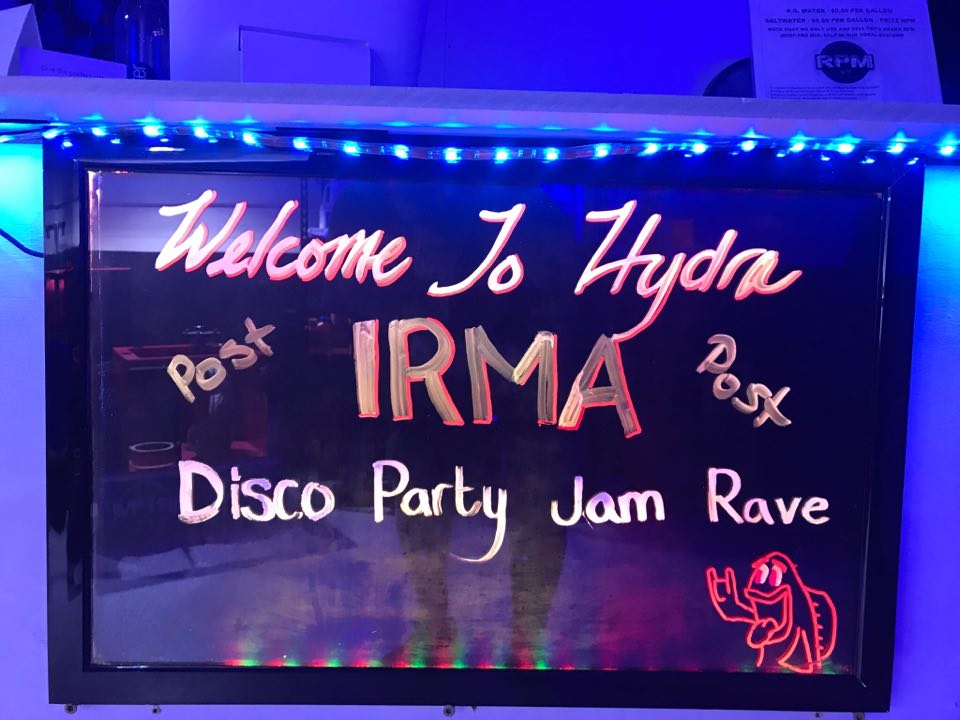 If you’re not still dealing with power outages, it’s probably time to blow off some steam.

Status: Monday saw the first updates from Wattley Discus, shared by Gabriel Posada. “I finally made it this morning from the safe zone to the hatchery. Couldn’t sleep last night but prayed myself to sleep. Made it past a war zone of fallen trees and downed power lines but once I got on the turnpike it was a smooth trip. I saw a few places with lights on and it gave me some hope. Walked into the Hatchery and had zero power. The smell I dreaded filled the air. That didn’t stop me from turning on the generator as we had been planning. In the dark, I saw little eyes staring at me. Once everything was operational I turned on my cellphone’s flashlight. God spared us. I am completely choked up as I type. There were a few casualties in the larger wild discus but for the most part, 90% of the hatchery survived. Your prayers and mine were answered. Thank you.”

How Wattley Discus Prepped: “We lost power on Saturday night and were not able to return until Monday morning. We had made preparations by fasting the discus since the previous Wednesday and did daily water changes, over 8000 gallons per day. We ended up losing 10% of our stock. Unfortunately, the county won’t allow us to have a standby generator due to the fact that there are seven other bays which, according to them, could cause carbon monoxide poisoning of the other tenants.” 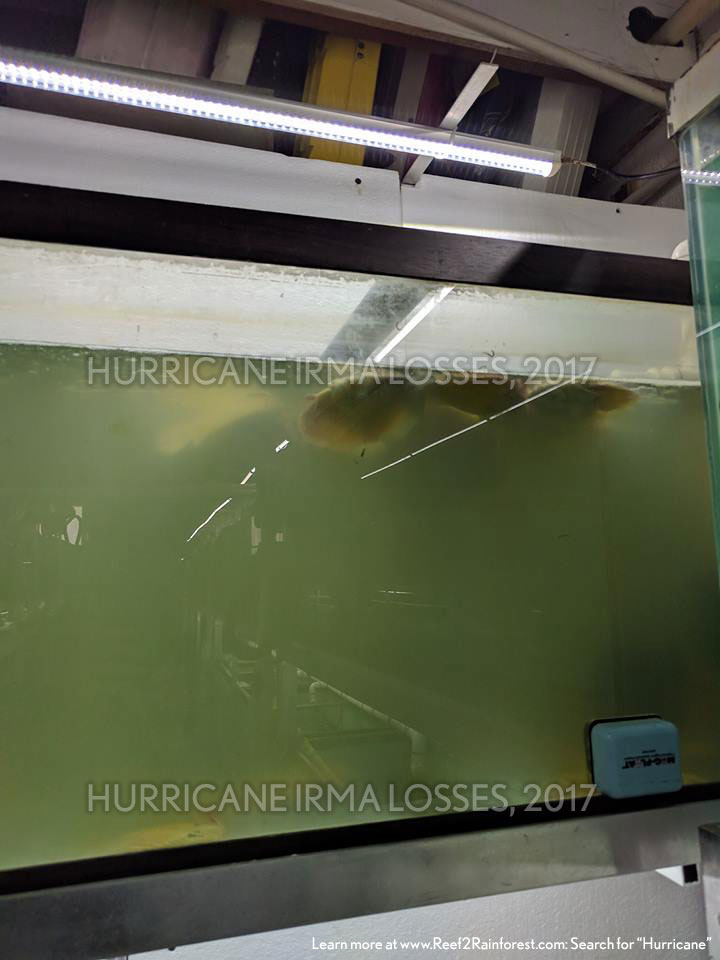 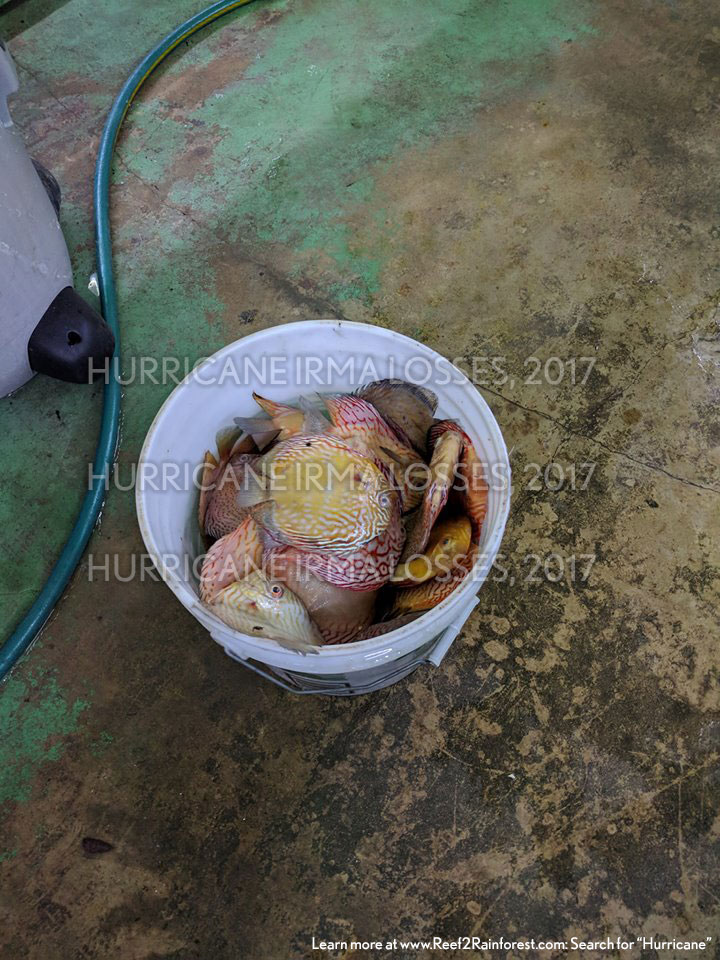 Collecting the lost discus in one of two 5 gallon bucket fulls, a heartbreaking task for Posada. 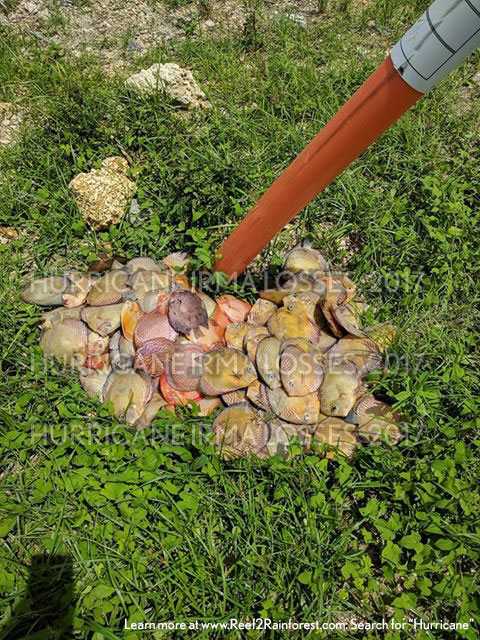 This represents the losses out of over 3000 Discus that were on hand at the time of Hurricane Irma.

Status: We heard back from Dr. Judy St. Leger, Vice President for Research and Science at SeaWorld Parks & Entertainment, on Tuesday evening. “SeaWorld fared well. No injuries or issues with any of the animals – just a lot of clean-up. Both SeaWorld in Orlando and Busch Gardens in Tampa will be open for visitors on Wednesday. Thanks for asking. We (I) really appreciate all of the concern and support.”

Gary Violetta, Director of Husbandry at SeaWorld Orlando, provided further updates. “Our initial reports are that the parks did well. Park teams are still accessing the full scope of the storm. All of our animals are accounted for, including the five dolphins brought to SeaWorld from the Florida Keys in advance of the storm. All animals were eating the same day.”

On Preparations: “We were pleased that our extensive severe weather plans were implemented and we were certainly as prepared as we could be,” said Violetta on Wednesday. “Safety of staff and animals is our top priority. We began preparing for IRMA about a week out. We had time to test all the emergency equipment and order needed supplies. Our ‘ride out’ team—the zoological team that stayed with the animals throughout the entire storm to ensure their safety—did a great job.”

Status: Clifton Martel, Zoo Nutrition, Research, & Browse Supervisor at Busch Gardens Tampa, check in with Reef to Rainforest as well to share their story. “We at Busch Gardens fared well thru Irma. For the most part downed trees was our largest issue. We were fortunate enough to not lose electricity, thus our Rising Tide Coral Tank was never stressed throughout the duration of the storm.”

Had Things Been Worse: “The hard part for the Rising Tide Coral Reef tank here at Busch Gardens would be an extended period with no electricity but fortunately that was not the case,” said a relieved Martel. “We have circulating pumps that run on battery power as a backup. If we had lost power we would have hooked up the main pump and chillers to a generator to help maintain the optimal water temperature but given that we did not lose power the tank didn’t skip a beat.” 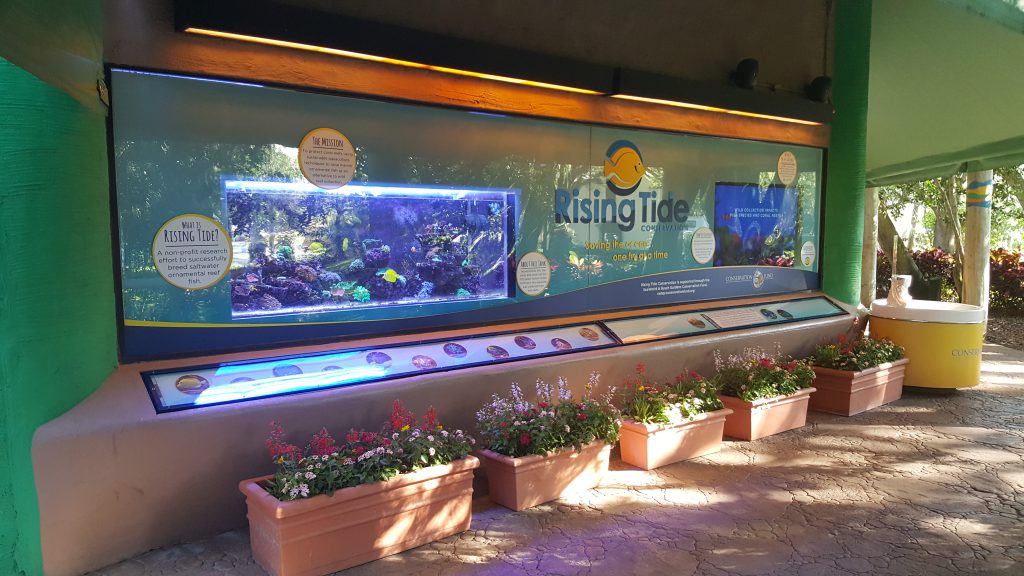 The Rising Tide Reef Aquarium at Busch Gardens in Tampa was unscathed by Hurricane Irma.

Status: Managing to eek out updates via a cell phone with service cutting in and out, Jacob Wise, President of JJ Corals, managed to bring us up to speed on the status of their business over the course of Wednesday, 9/13/17. “With the recent hurricane Irma, our store suffered great loss. We distribute a lot of Carribean species to California and the Midwest. Despite forewarning out customers of what was to come [including the fact that future supplies of Caribbean fish could be difficult to come by following the hurricane], we suffered the bulk of our loss in Caribbean fish.”

Insights: Wise was blunt about the hard lessons forced upon him by Irma. “The first lesson learned is that you can never have a big enough generator. Second, keep you manufacturers and distributors in the loop of the situation, they are more than willing to help.” Wise noted they’ll try something different with their livestock when this happens next. “Preparing for the next hurricane we will send everything out of state taking a little loss selling at discounted rates vs. losing stock in our tanks because of power loss.”

Status: “Overall we have fared extremely well,” said Segrest Farms president Sandy Moore on Wednesday evening. “We had some cosmetic wind damage and minor flooding during Hurricane Irma.  We evacuated our drivers and trucks from the Houston market before Hurricane Harvey hit.”

Moore also shared an update on behalf of the many Florida fish farms in the area. “Some farms lost some plastic over their greenhouses, some had minor flooding, and some had power issues. Some farms are still not accessible due to downed trees. They’re going to need your support over the next weeks as they rebuild.”

After speaking with the Secretary of the Florida Tropical Fish Farms Association (FTFFA) on Thursday, Moore relayed an update from them. “The FTFFA the office in Winterhaven continues to have no phone or Internet access, and they don’t expect it before Sunday. FTFFA member farms are reporting varying degrees of losses, from light to very heavy; the impact depends on location. Tropical fish farms in Lakeland and Plant City were the most heavily hit.”

Segrest saleswoman Julie Filteau sent out an update earlier on Tuesday, noting that, “There are a couple fences and trees down here at the farm, but no major damage, fish are all fine. The important thing is we are all fine, it could have been a lot worse…oh, pray we get power back today where I am staying. It is still hot!!!”

Even Veterans Can Find New Problems: Moore noted Segrest is well prepared for these situations. “We have been through a number of hurricanes, and have hurricane protocol written and followed for each department, and each facility. There are always lessons during these events; for Irma we learned to store more fuel than we think we’ll need. The continued fuel shortages are unprecedented here.”

Status: While we’ve not heard directly from the team at CRF, the following update was posted on their Facebook page as of September 12th. “Coral Restoration Foundation remains closed in the wake of Hurricane Irma. The Florida Keys are without consistent power, water, and supplies. We are happy to report that our Exploration Center, offices, boats, and trucks are in good shape. Our team evacuated to safety ahead of Irma and will return to Key Largo in the days ahead. Once our dedicated staff and volunteers are back and it is safe to navigate the waters, we will assess our coral nurseries. Please stay tuned to our social media for updates. We are grateful for the outpouring of support for our staff and our reefs.”

Status: Kara and Philipp Rauch work as marine fish collectors and live rock farmers in the Keys, offering wholesale and retail livestock offerings, carrying on on the family business started by Ken Nedymier (formerly of Sea Life Inc, now Coral Restoration Foundation). Brief updates came in on Thursday from Kara. “We are swamped with cleanup right now. We have no electricity and tons of work to do in the next few days. We evacuated the Keys and just got back yesterday. The warehouse is still standing too. We do have a lot of clean up to do but we think that we will be back and operational in 2 weeks. I hope there are still fish in the ocean.”

Continue to Part 3 of our coverage.